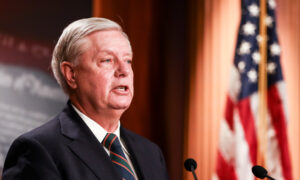 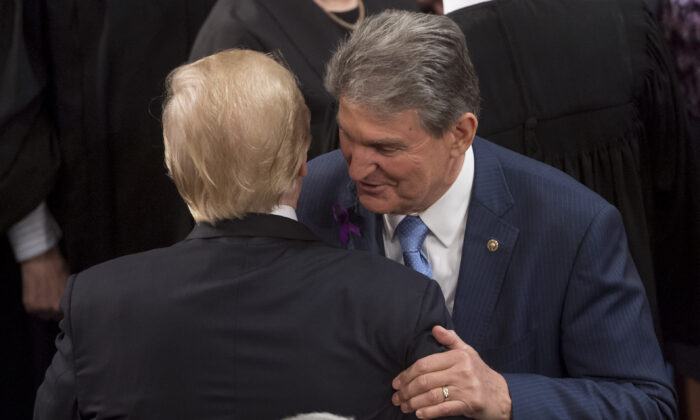 Sen. Joe Manchin (D-W.Va.) speaks with then-President Donald Trump after Trump gave a State of the Union Address before a Joint Session of Congress at the US Capitol in Washington on Jan. 30, 2018. (Saul Loeb/AFP via Getty Images)
Democrats

Trump Praises Manchin for Not Supporting Abolishing the Filibuster

Former President Donald Trump on Monday said Sen. Joe Manchin (D-W.Va.) is making the right choice in his refusal to go along with Democrat efforts to end the filibuster.

The idea of abolishing the filibuster is so radical that even Sen. Bernie Sanders (I-Vt.), a self-described socialist, didn’t bring it up on the campaign trail, Trump added.

The filibuster is a rule that requires at least 60 votes to pass most bills in the Senate.

The upper chamber is currently split in half, with 50 Republicans and 50 Democrats or nominal Independents who regularly vote with the party.

Critics have increasingly pushed for ending the filibuster, arguing the GOP is obstructing President Joe Biden’s agenda in the Senate.

The filibuster has changed over time. Past rules required senators attempting to block legislation to be on the Senate floor speaking in order for them to delay a vote on a bill. That was changed decades ago; senators can now merely object to a bill, triggering the 60-vote threshold.

Removing the filibuster would mean a bill could be passed with a majority vote. Bills in the House of Representatives pass with a simple majority.

“I have said it before and will say it again to remove any shred of doubt: There is no circumstance in which I will vote to eliminate or weaken the filibuster,” Manchin wrote in a Washington Post op-ed in April. “The time has come to end these political games, and to usher a new era of bipartisanship where we find common ground on the major policy debates facing our nation.”

Another moderate Democrat, Sen. Kyrsten Sinema (D-Ariz.), has also said she doesn’t support abolishing the filibuster. No Republicans have said they back altering or changing the rule.

In both cases, a simple majority vote was required through senators saying they wanted to create a new Senate precedent, according to the Brookings Institution. “In sum, by following the right steps in a particular parliamentary circumstance, a simple majority of senators can establish a new interpretation of a Senate rule,” Molly Reynolds of the think tank wrote.