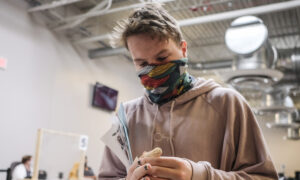 Ohio Governor Reversed Mask Order Because It Went 'Too Far'
0 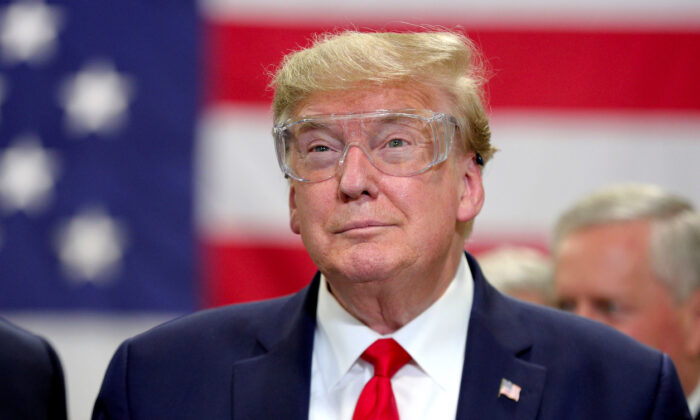 In his first trip out of Washington since late March, President Donald Trump on Tuesday visited a new mask production facility in Phoenix, Arizona, and took the opportunity to praise the “manufacturing might” of the facility to support healthcare workers amid the CCP virus pandemic.

“Respirators are there to protect our heroic doctors and nurses as they fight the unseen enemy,” Trump said after touring the facility. He praised the facility’s N95 masks, calling them “high-quality” and “made to perfection.”

Trump also pointed out that “more than 150 Honeywell employees are working around the clock, three shifts a day, six days a week” to create the masks.

“It’s the men and women of Honeywell who are supplying the weapons, armor, the sweat, and skill in the war to defeat the new and invisible enemy, a tough enemy, a smart enemy … The people of our country are warriors,” the president said.

“Like generations of patriots before you, the workers of this factory are pouring their heart and their soul and their blood into defending our nation and keeping our people healthy and safe,” he added. “You make America proud. You really do. And I want to thank you very much. That’s why I’m here.”

Honeywell had earlier announced about its efforts to ramp up mask production at the aerospace plant in Phoenix, as well as at its safety eyewear plant in Smithfield, Rhode Island. Such efforts have added at least 1,000 jobs—500 to each site—and will enable the company to produce more than 20 million N95 respirators per month. Trump called the feat “a truly miraculous achievement.”

The president also took the opportunity to praise local manufacturing.

“We know it matters where something is made, and we want essential medicines, supplies, and equipment to be manufactured, produced, and made right here in the good old USA,” Trump said.

“My administration believes in two simple rules: Buy American and hire American,” he added. “In the 20th century, Honeywell workers helped make America the world’s greatest manufacturing superpower. This is a great company, and it played a very big role.”

Prior to addressing the workers at Honeywell, Trump participated in a roundtable discussion at the facility about supporting Native Americans amid the CCP virus pandemic.

“Native Americans have been hit hard by the terrible pandemic,” Trump said, later adding that the administration is bringing the Navajo Nation 1,000 rapid-result Abbott Laboratories tests for the CCP (Chinese Communist Party) virus, a novel coronavirus that emerged in China late last year. Trump also said that the Navajo Nation will receive $600 million to combat the effects of the pandemic.