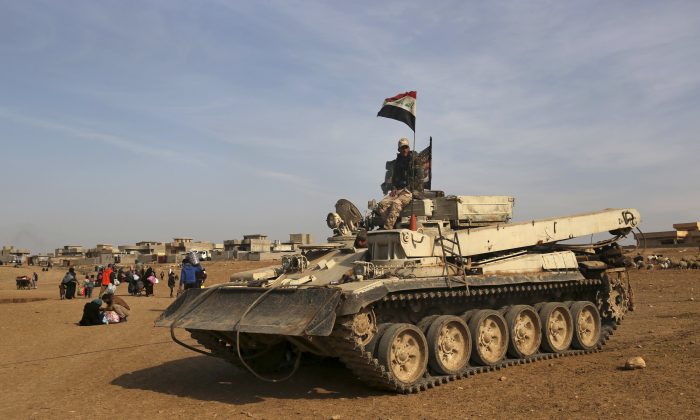 Iraqi Army vehicles advance as civilians flee their villages due to fighting between Iraqi security forces and Islamic State militants, on the outskirts of Mosul, Iraq on Jan. 26, 2017. (AP Photo/Khalid Mohammed)
Middle East

WASHINGTON—President Donald Trump is expected to ask the Pentagon for ways to accelerate the fight against the ISIS terrorist group in Iraq and Syria. Officials said the options probably would include steps the Obama administration considered but never acted on, from adding significantly more U.S. troops to boosting military aid to Kurdish fighters.

Trump’s visit Friday to the Defense Department’s headquarters will start the conversation over how to fulfill his inauguration address pledge to eradicate radical Islamic terrorism “completely from the face of the Earth.”

Among the possible options are sending in more Apache helicopters and giving the U.S. military broader authority to make routine combat decisions, according to current and former U.S. officials familiar with the ongoing discussions.

The officials weren’t authorized to publicly discuss internal deliberations and spoke on condition of anonymity.

As a candidate, and now as president, Trump has never revealed details of his plan for defeating ISIS, and has said that announcing plans openly for our enemies to hear is poor strategy.

He has railed against the trillions of dollars that America’s post-9/11 wars in Iraq and Afghanistan have cost. But he suggested at one point that he would have “no choice” but to exponentially expand the Obama administration’s limited deployment of American forces fighting the terrorists.

In a Republican primary debate last March, Trump raised the prospect of needing 20,000 to 30,000 troops to “knock out” ISIS.

It’s unlikely that military commanders would push for many thousands of additional troops in Iraq. While the Iraqis have asked for more help, a large U.S. military presence could unsettle the fragile, U.S.-allied government.

One possible option in Syria is sending an Army brigade to help retake Raqqa, which ISIS considers its headquarters, according to the officials. Military planners have discussed that option during previous reviews, and could give it to Trump so he has the widest array of possible changes.

The idea always involved the United States handing off authority to a local council or group to govern liberated areas, but military commanders never endorsed or recommended the proposal in the past.

A more likely possibility could be new ways to enhance the abilities of the U.S.-backed Syrian Kurds, known as the YPG. They have been the most effective force against ISIS in northern and eastern Syria.

NATO ally Turkey considers the group a terrorist organization. But the YPG forms the main force to retake Raqqa and some in the Pentagon have suggested giving the Kurds heavy weapons, including rocket-propelled grenades, machine guns and heavy combat vehicles. The idea never made it through debate in President Barack Obama’s National Security Council.

Military commanders have said they’re prepared to give the Trump White House a broad range of options. Many will involve expanding existing efforts to train, advise, and enable local Iraqi and Syrian forces. Increased intelligence and surveillance are options, as is allowing U.S. troops to embed more frequently with Iraqi soldiers near the front lines.

The Pentagon also would like more freedom to make daily decisions in how it fights the enemy.

The Obama administration often forced military leaders to seek permission for tactical combat decisions, frustrating commanders. One example, according to a senior official, involved the use, placement and staffing of the High Mobility Artillery Rocket System—a highly lethal and effective rocket launcher used in Iraq. Commanders would like greater authority to decide when and how to use the weapon.

Military leaders hope for less micromanagement from the White House. There is an expectation the Trump administration may set new parameters for the military to work within.

At the Pentagon on Friday, Trump planned to host a formal swearing-in ceremony for Defense Secretary James Mattis, a retired Marine general. The president also was to meet privately with Mattis and military leaders in what’s called the Tank—the Joint Chiefs of Staff’s secure conference room.

One big decision Trump will have to address is whether to keep fighting ISIS primarily through local forces or upending the strategy by assuming a greater U.S. leadership role through more forces on the ground.

A wild-card to all the planning is Trump’s desire for closer counterterrorism coordination with Russia.

ISIS in Syria Destroys Part of Roman Theater in Palmyra

In Syria, the Obama administration and the Russians backed two opposing sides in the nation’s civil war. But that conflict has slowed since Russia helped Syria’s government oust rebels from the city of Aleppo. Direct negotiations between the government and rebels took place this week for the first time in years.

It’s not yet clear how much Washington and Moscow can cooperate.