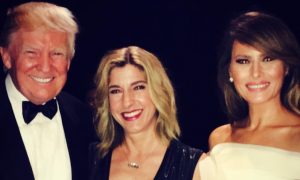 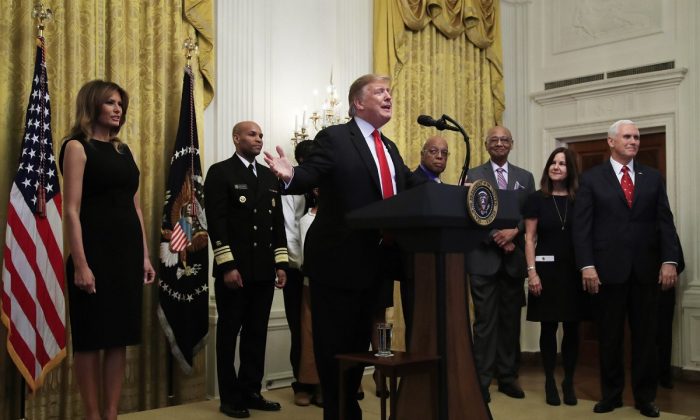 Trump Pledges to Expand Opportunity for Every Race

President Donald Trump is pledging to expand opportunity for Americans of every race, religion, and creed as he commemorates Black History Month.

Speaking to hundreds at a White House reception on Feb. 21, Trump boasted about the economy and said the unemployment rate for African-Americans is at its “lowest ever.”

Black unemployment did reach a low, 5.9 percent, in May 2018. But that figure changes monthly and had increased to 6.8 percent by January.

Catherine Toney, one of the first inmates released through the bill’s passage, thanked Trump and son-in-law Jared Kushner for their efforts as the crowd applauded in approval.

President Donald Trump said his efforts in passing criminal-justice reform have elicited phone calls from NFL players who have thanked him for his commitment.

Speaking to CBS’s “Face the Nation” in a wide-ranging interview that aired on the same day as the Super Bowl, Trump said he did what previous presidents failed to do. In December last year, he signed into law a landmark criminal-justice reform bill dubbed the “First Step Act” that directly addressed unfair disparities that had plagued the judicial system for decades.

“I’m the one that had passed judicial reform,” @realDonaldTrump told @margbrennan, claiming that “a lot of people in the NFL have been calling and thanking me”

Trump said he addressed a significant portion of the player’s concerns with the passage of his bill, which gives judges more discretion in sentencing drug and lower-level offenders while also reducing the recidivism risks by expanding programs such as job training.

“A lot of [the protest] is having to do with reform, from what I understand,” he said. “Whether it’s criminal justice or whatever, it may be and they have different versions and everybody seemed to have a different version of it. But a lot of it had to do with that, and I took care of that.”

The act, co-sponsored by more than a third of the Senate, received evenly balanced support among both Democrats and Republicans. It aims to make the federal criminal-justice system fairer, reduce overcrowding in prisons, and save taxpayer dollars. Certain mandatory minimum sentences also were adjusted.

The Associated Press and The Epoch Times reporter Bowen Xiao contributed to this report.