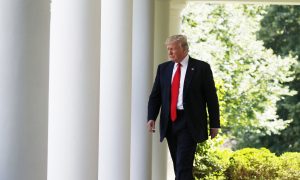 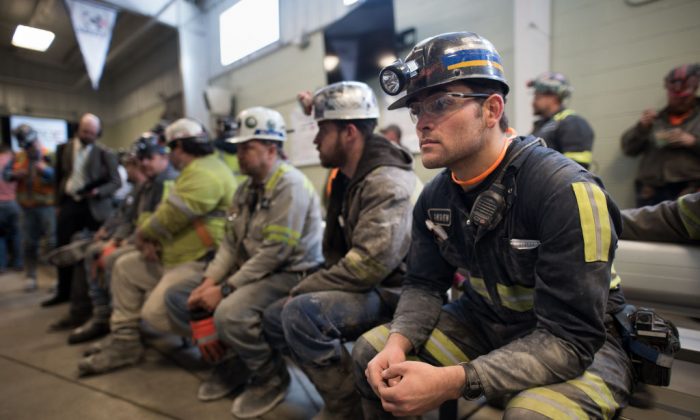 Abundance and dominance are key words for the Trump administration’s new energy policy.

Speaking on June 29 at an event at the Department of Energy, “Unleashing American Energy,” President Donald Trump recalled how in the past 40 years, Americans have heard “constant claims that the world was running out of oil and natural gas.” Americans, Trump said, have been told the energy crisis could only be solved through “Draconian restrictions.”

In place of a policy and psychology of scarcity, Trump has proposed to unleash America’s “extraordinary energy abundance.” America will seek “energy dominance.”

The United States also leads the world in recoverable coal reserves, with 28 percent of the world’s total, and 50 percent more reserves than the next country, Russia.

Robert L. Bradley, CEO and founder of the Institute for Energy Research, believes America’s energy abundance is a result of the innovation and efficiency of a free-market system.

The United States gets more resources from its potential than any other place in the world, Bradley says. “This is because we have private property rights and private companies, rather than state-owned oil companies, where it is in the self interest of these individual entrepreneurs and these firms to find new ways to extract energy for consumers,” he said.

Illustrating Bradley’s point has been the development of technologies that release previously inaccessible petroleum and natural gas deposits from shale formations. Fracking, which began to grow in prominence in 2000, now accounts for two-thirds of U.S. natural gas production and one-half of U.S. oil production.

Meanwhile, he will be building on the achievements of the shale revolution, which, by increasing the stock of petroleum and natural gas, has already dropped energy prices. This has led to developments that anticipate some of the results he hopes for from an aggressive development of U.S. energy resources.

Americans celebrated July 4 with average gasoline prices of $2.33 a gallon, the lowest prices since 2005.

In 2014, gasoline prices in July averaged $3.68 a gallon. They fell in July 2015 to $2.88 a gallon, inspiring media coverage about the effects on working families of cheap fuel prices.

Americans celebrated July 4 with average gasoline prices of $2.33 a gallon, the lowest prices since 2005.

For working families, savings of this magnitude are a significant bonus. The Times points out that the money freed up tends to be spent on employee-heavy industries like retail, dining, and travel.

Those extra purchases stiffen employment in those sectors. In addition, as gasoline prices fall, the transportation costs for everything become cheaper—inflation for essentials like food is beaten back, further benefiting the average family’s budget.

Petroleum is the feedstock for chemical plants. U.K. newspaper Evening Standard reported on June 14 that the difference between petroleum costs in the United States and Europe has grown so great that chemical plants in Europe can no longer compete.

The Standard reports that while there has been little petrochemical investment in Europe over the past decade, since 2010 around $80 billion in petrochemical projects in the United States have been completed or under construction.

Catrina Rorke, a senior fellow with the free market think tank R Street, said cheap, reliable, and abundant energy may bring more manufacturing to the United States of not just chemical products, but also energy intensive and heavy products, as it will be more cost effective to manufacture these domestically and save on transportation costs.

Rorke pointed out that BMW announced on June 26 that it will expand its plant in Spartanburg, South Carolina, making it BMW’s largest production facility in the world. The expansion will cost $600 million and add 1,000 jobs.

In addition to manufacturing jobs, Trump expects that developing America’s energy resources will create large numbers of jobs in the energy sector itself.

A December 2015 study by Louisiana State University and the Institute for Economic Research on opening federal lands to oil, gas, and coal leasing estimates this will produce 2.7 million jobs annually over the next 30 years.

Such jobs will make the most dramatic difference in a number of Indian reservations in the western states.

Jobs on the Reservation

On June 28, Trump hosted a gathering of tribal leaders at the White House. Trump commented on how many of the tribal lands have rich natural resources, but “the federal government has put up restrictions and regulations that put this energy wealth out of reach.”

The president promised to put energy development back in the tribes’ hands.

If Trump succeeds in doing this, his administration will reverse some of the effects of almost two centuries of U.S. policy that have viewed the Native Americans as wards of the federal government. As such, they have been treated as incompetent to manage their own affairs and have suffered under gross federal mismanagement.

Native Americans have the highest poverty rate of any ethnic group in the United States. Associated with this deprivation are high rates of crime, alcoholism, drug abuse, gang membership, and sexual abuse.

If the tribes that have mineral wealth are successful in developing it, this will immediately provide high-paying jobs on the reservation and royalties from energy will provide income for the tribe as a whole.

The policy Trump called “energy dominance” in his remarks at the June 29 Energy Department event is the latest iteration of a consistent set of policies that have been developed since the first day of his administration.

Since then, the Trump administration has taken a number of steps to put into action his vision of a robust development of U.S. energy resources.

In February, the Bureau of Land Management conducted its largest sale of leases for oil development on federal lands in four years.

On Feb. 7, the Dakota Access pipeline, which delivers oil from North Dakota to a pipeline in Illinois and had been blocked in a months-long controversy, was approved. On March 24, the Keystone XL pipeline, which will deliver oil from Canada to refineries on the Gulf coast and which was first proposed in 2008, was approved.

On March 28, Trump signed an executive order to create energy independence. A principal effect of this order is to attempt to roll back most of the rules and guidance regulating energy production put in place by the Obama administration.

This includes a review of the Clean Power Plan, the first step to replacing it. This rule is often identified as an attempt by the Obama administration to put coal production in the United States out of business and is currently blocked by a stay issued by the Supreme Court while a suit against it is heard.

Also in the March 28 executive order, Trump ended the moratorium on leasing coal on federal lands.

On April 28, Trump signed an executive order implementing an offshore energy plan that directs the Department of Interior to revise the schedule for oil and gas leases to include the outer continental shelf.

On May 31, Secretary of the Interior Ryan Zinke signed an order “to jump-start Alaskan energy production in the National Petroleum Reserve.”

In his statement withdrawing from the accord, Trump refers to the United States as the “world’s leader in environmental protection.” In his various statements and speeches on energy, Trump repeatedly states that his policy is to ensure clean air and water in the United States. In these statements, he doesn’t mention carbon dioxide, suggesting he doesn’t see it as a significant pollutant.

Rorke of R Street said Trump’s goal of dominance is about changing the game not just domestically, but worldwide.

Trump’s remarks about Unleashing American Energy feature six new initiatives, including revising nuclear power, but what is new in his remarks is an international focus.

He announced a new pipeline to Mexico, which will allow the United States to increase petroleum exports. He also proposed having the Treasury Department explore U.S. financing of new clean coal power plants in the Ukraine.

Trump also announced the approval of new facilities for the export of liquid natural gas (LNG) and a deal signed by an American company to export more LNG to South Korea.

Trump mentioned that the leaders of South Korea were visiting the White House that afternoon and suggested some lobbying for American energy would be on the agenda: “We will also be talking about them buying energy from the United States of America, and I’m sure they’ll like to do it.”

While Trump uses his office to promote American energy, the United States is rapidly ramping up its ability to export LNG. It has one terminal capable of exporting the gas and five under construction.

This is the first wave of LNG terminals, with more to come. These six terminals are expected to provide 50,000 permanent jobs, according to a study by the American Petroleum Institute.

This expansion of U.S. exports provides U.S. allies with a fuel source that they know will not be used to blackmail them. According to the Hill, nearly every member of the Polish government turned out to greet the first shipment of U.S. LNG. If Ukraine gets new coal plants, it will also have an energy source less liable to manipulation by a hostile neighbor.

Trump’s call for expanding production of U.S. natural gas, oil, and coal will run into market limitations. The worldwide glut of natural gas and oil has prices low enough to challenge the ability of American producers to make a profit.

At the same time, the low prices of natural gas make “the future of coal grim,” according to Adele Morris, policy director of energy and economics at the Brookings Institute. Without subsidizing coal, Morris said, it can’t compete with the price of natural gas.

Moreover, the next administration may share the Obama administration’s concern with coal’s greater production of carbon dioxide. This uncertainty means that electric utilities are not going to invest in new coal plants, Morris said.

These basic facts mean that the Trump administration may have difficulty translating America’s energy abundance into a literally dominant position in a competitive world energy market.

The conclusion of Trump’s remarks at the June 29 event recalls the end of his speech to the joint session of Congress on Feb. 28. Calling for a renewal of the American spirit, Trump asked “all members of Congress to join me in dreaming big, and bold, and daring things for our country.”

That golden era is one, Trump goes on to say, in which “what we dream, and what we build, will truly be second to none.”

For Trump, the unleashing of American energy turns out not just to be about jobs and wealth, but about the power to dream.