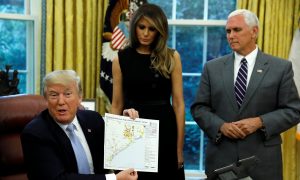 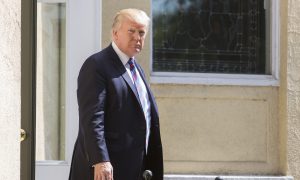 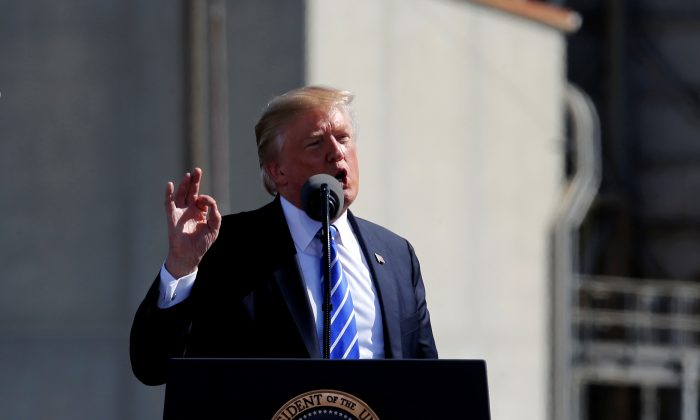 President Donald Trump delivers remarks on his proposed changes to the tax code during an event with energy workers at the Andeavor Refinery in Mandan, North Dakota on Sept. 6, 2017. (REUTERS/Jonathan Ernst)
US News

The tax plan represents a sharp reversal from the failed policies of the past, says Trump
By Emel Akan
Print

President Donald Trump delivered a speech on tax reform in Bismarck, North Dakota on Sept. 6. This is his second pitch on taxes following the one he made in Missouri last week. Trump called on Congress to work with him on overhauling the current tax code, which he called “a giant self-inflicted economic wound.”

“Our painful tax system has become a massive barrier to America’s economic comeback,” he said at a North Dakota refinery in Mandan.

“We’re penalized. It costs us millions of American jobs, trillions of dollars, and billions of hours wasted on paperwork and compliance.”

“America’s high tax rates punish companies for doing business in America and encourage them to move to other countries,” he said. “Our tax plan represents a sharp reversal from the failed policy of the past.”

“My administration strongly rejects this offshoring model and we’ve embraced a new model—it’s called the American model,” he said.

“North Dakota is an inspiring example of the amazing things that are possible when we unleash the genius of American innovators,” Trump said.

North Dakota has enjoyed the lowest unemployment rate during the past decade, thanks to the shale oil boom that boosted the state’s economy. The state had a record low unemployment rate of 2.2 percent in July.

“North Dakota chose to embrace American industry and the American worker even when many in Washington wanted to tax and regulate your industries totally out of existence,” Trump said.

“I want all of America to be inspired by the North Dakota example,” he said.

The administration has not yet announced the specifics of the tax reform, but Trump said his officials would get into details over the next two weeks.

The tax reform also intends to reduce the complexity of the tax code and eliminate special interest loopholes.

He said 94 percent of the families need professional help to do their taxes. This is why the tax preparation industry generated 10 billion dollars in revenues last year, he said.

“That’s one business I want to drive down, sorry. H&R Block will not be supporting Donald Trump, I can tell you.”

Trump also said that the reform would provide tax relief to middle-income families through various benefits such as raising the standard deduction and increasing the child tax credit.

Under existing policies, the Congressional Budget Office (CBO) projects a 2 percent economic growth for the next ten years. Tax relief and reform can boost economic growth to 3 percent or more, according to the White House. And the sustained increase in growth is expected to generate 12 million new jobs and $10 trillion additional economic activity over the next decade.

Trump also referred to personal stories from North Dakotans, including talking about Julie Ellingson, a fourth-generation cattle rancher and a mother of five from Bismarck.

“Like many family ranches, Julie worries about the death tax shutting down her family business and keeping her from passing it on to her children. It’s a devastating tax,” Trump said.

“We are not going to allow the death tax or the inheritance tax or whatever you want to call it to crush the American dream.”

Trump closed his speech calling on Republicans, Democrats, and independents to support his tax reform.

“We’re going to put America first. It’s time. We no longer have to accept a tax code that lets special interests win.”