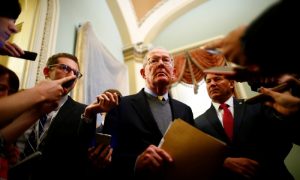 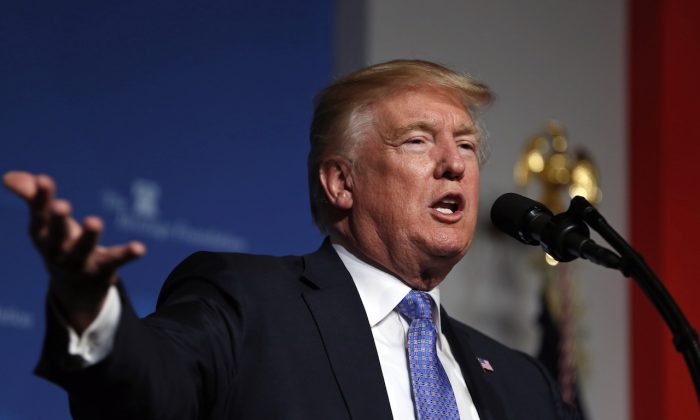 President Donald Trump delivered a speech on tax reform at The Heritage Foundation’s annual President’s Club Meeting in Washington, DC on Oct. 17. He urged GOP senators to back his tax reform plan, which he called a “once in a generation opportunity.”

He said it would be hard to get Democratic votes “because they’re obstructionists.”

“But if we get the Republicans we need, which is virtually every single one of them … we will get that largest tax cut in the history of our country.”

The Senate’s vote on this year’s budget resolution is key to the Republican effort to overhaul the tax code.

If the Senate passes the budget, it will allow the Senate to pass a tax reform bill with 51 votes under reconciliation, rather than the usual 60 needed for most legislation.

In the address, Trump repeated the pillars of his plan, including proposed tax relief for middle-class families.

“We are nearly doubling the zero bracket and we substantially increase the child tax credit for working families, which so many people want, including my daughter Ivanka,” he said.

American taxpayers spend over 6 billion hours each year on complying with IRS tax filing rules, according to the IRS’s Taxpayer Advocate Service. And this costs the U.S. economy more than $260 billion annually in lost productivity, according to the National Taxpayers Union.

Trump pledges to simplify the tax code as part of his tax reform plan.

“Under our framework, the vast majority of families will be able to file their taxes on a single sheet of paper,” Trump said.

For the next five years, companies will also be allowed to fully write-off or expense the cost of new equipment immediately, which will help maximize job creation, according to Trump.

In addition, the plan encourages American corporations to bring their overseas earnings back to the country. He criticized previous administrations for failing to attract trillions in investments because of tax laws.

“Democrats want it back. Republicans want it back. And they have for a long time,” said Trump. “They’ve never been able to make a deal. Lack of leadership.”

Trump claims this change, along with a lower tax rate, would likely result in a $4,000 pay raise for the typical American household.

In addition, he said his administration was ending job-killing regulations at a record pace.

“Our regulatory reductions are going to put more Americans back to work and more lobbyists out of work,” he said. “Which is why regulatory reform is a crucial part of our drive to drain the swamp.”