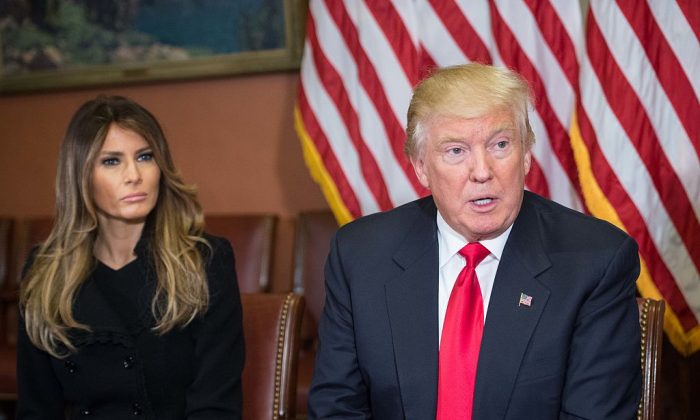 Melania Trump listens to her husband US President-elect Donald Trump speak to the press at the US Capitol in Washington, DC, on November 10, 2016. (NICHOLAS KAMM/AFP/Getty Images)
Politics

For Now, Melania Trump Plans to Be Long-Distance First Lady

It will be one of many unusual things about a Donald Trump administration: a long-distance first lady.

Trump will move into the White House after the Jan. 20 inauguration. Breaking with tradition, Melania Trumpand 10-year-old son Barron plan to remain in New York City at least until the end of the school year.

While the decision sets Melania Trump apart from other first ladies — both Michelle Obama and Hillary Clinton moved with school-age children in tow — it seems in character. The former model and naturalized U.S. citizen from Slovenia was an elusive figure during the campaign and had no political experience before her husband’s stunningly successful outsider campaign.

“We’re in a time when all the molds are being broken,” said Katherine Jellison, head of the history department at Ohio University and an authority on first ladies. “That may be the case where we have a redefining of a role that, after all, isn’t in the Constitution.”

Trump spokesman Jason Miller cited “sensitivity” about pulling Barron from school midyear. In an interview with US Weekly earlier this year, Melania Trump said: “Barron is the priority for now and he needs me at this age. He needs a parent at home, and I like to keep it as normal as possible.”

Anita McBride, chief of staff to Laura Bush during her time in the White House, noted that Michelle Obama also weighed delaying her family’s move for similar reasons, but “ultimately made a different decision and one that suited their family.”

Just how Melania Trump will tackle the White House, and how she will be received by the public, is unclear. The first lady usually serves as the official hostess and typically undertakes some kind of advocacy work. Michelle Obama took on childhood obesity and other projects. But being first lady has no official duties or any clear playbook.

Married to Donald Trump for nearly 12 years, Melania Trump is his third wife. A U.S. citizen since 2006, she will be only the second first lady born outside the country. Louisa Catherine Johnson Adams, wife of John Quincy Adams, was born in London to an American father and British mother.

So far, Melania Trump’s few forays into politics have been a mixed success.

Her speech at the Republican National Convention was widely panned after the discovery of striking similarities of portions of her speech to the one delivered by Michelle Obama at the 2008 Democratic convention. And she has had to defend her husband against accusations of sexual assault. She has challenged the veracity of reports that he imposed himself on women, despite his boasts in a 2005 video about doing so.

In the couple’s first postelection interview, on CBS’ “60 Minutes,” Melania Trump said: “I will stay true to myself. I’m very strong and tough and confident.”

For now, McBride said, the professional staff at the White House can do much of the event planning, with the first lady weighing in remotely and traveling down from time to time.

McBride noted one big event looming: the Governor’s Ball in February, a standing event on the calendar.

Another possibility is that other family members, like Trump’s daughter Ivanka, could take hostess duties at times. There is plenty of historical precedent for that, according to Jellison. When Jackie Kennedy traveled, President John F. Kennedy’s mother or sisters would fill in. If Bess Truman was home in Missouri, her daughter, Margaret, would play hostess during Harry Truman’s presidency. Julie Nixon sometimes appeared on behalf of her mother, Pat Nixon.

However the events are organized, Doug Wead, who worked for President George H.W. Bush and wrote a book about presidents’ children, said the Trumps are experts at event planning.

“You have this unusual situation where you have a president who doesn’t have political experience, but he has business experience. They will know how to entertain,” Wead said.

In terms of advocacy, Melania Trump has mentioned doing work that addresses bullying — a notable choice given the president-elect’s love of name-calling on social media. It can take some time for the first lady to launch personal projects. Michelle Obama began her “Let’s Move” initiative about a year into her husband’s first term.

If Melania Trump tries to keep some distance from Washington even after she moves, she wouldn’t be the first presidential spouse seeking space. Bess Truman often fled Washington for her hometown of Independence, Missouri. And Jackie Kennedy liked to travel in Europe.

“I’m not saying it has always been the case that first ladies and their families loved living in the White House,” Jellison said. “There were many who spent a great deal of time away.”