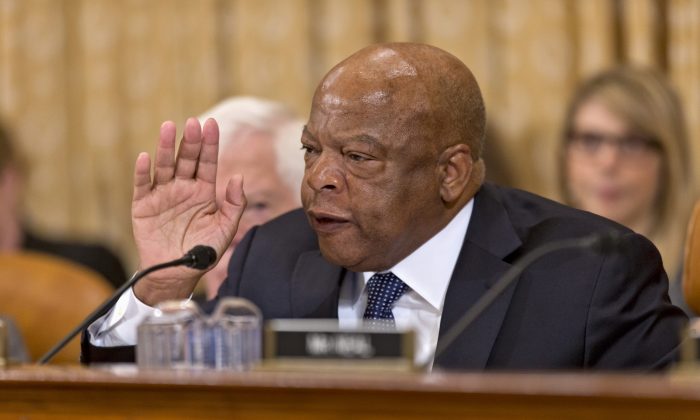 Representative John Lewis, a Democrat from Georgia, said Friday that he would boycott President-elect Donald Trump’s Inauguration Day in less than a week.

Lewis claimed that Russian interference helped get Trump elected. “I think the Russians participated in helping this man get elected. And they helped destroy the candidacy of Hillary Clinton,” Lewis told NBC News’ “Meet the Press,” last week.

“Congressman John Lewis should spend more time on fixing and helping his district, which is in horrible shape and falling apart (not to mention crime infested) rather than falsely complaining about the election results,” Trump wrote in a two tweets.

Following his criticism of Lewis, considered a civil rights icon, some lashed out at Trump saying it was wrong for him to go after Lewis on the eve of Martin Luther King Jr. Day, which is Monday. Lewis, one of the original Freedom Riders, was beaten up by police while marching in Selma, Alabama in 1965.

“While I have great respect for John Lewis, particularly his contributions to the civil rights movement, I was deeply disappointed to see someone of his stature question the legitimacy of Donald Trump’s election as president and say he’s not attending the inauguration, and I hope he reconsiders both positions.”

“We need folks like John Lewis and others who I think have been champions of voter rights to actually recognize the fact that Donald Trump was duly elected. He’s going to put his hand on the Bible in five days,” Priebus told on ABC’s “This Week.”

“I think it’s incredibly disappointing―and I think it’s irresponsible―for people like himself to question the legitimacy of the next United States president,” he said.

Toby Keith, 3 Doors Down to Perform at Trump Inauguration