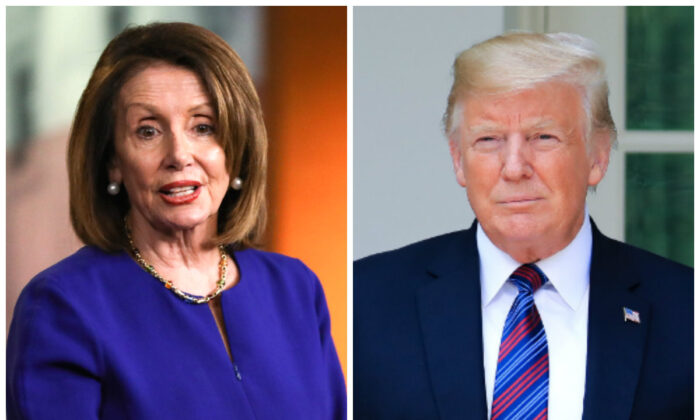 After House Speaker Nancy Pelosi (D-Calif.) announced a bill to set up a congressional body about determining whether the president is fit for office, President Donald Trump said she is concerned about Democratic nominee Joe Biden.

“Let’s assume the Democrats are going to vote for sleepy Joe, which is ridiculous because Joe shouldn’t be a candidate, Joe’s in no condition to be a candidate. … the 25th Amendment that crazy Nancy is playing around with—she’s gone crazy, she’s a nut job— but this 25th Amendment,” Trump said on Rush Limbaugh’s radio show Friday.

“I think they put it in so they can get Kamala in,” he said, referring to Sen. Kamala Harris (D-Calif.), Biden’s choice for vice president.

Republicans have frequently alleged that Biden, due to his advanced age, would not be able to serve a full term, adding that Harris could then take over before his term ends.

Pelosi’s proposal would appoint a 17-member commission of experts who would determine if Trump or a future president is fit for office to possibly invoke the 25th Amendment of the U.S. Constitution.

Pelosi told a news conference that the bill is not about Trump, but it’s about the office of the presidency.

“We would like to have it in place for future presidents,” she said, adding that it would also apply to Trump if he wins in November. “It’s not about the election at all. The timing is for now because people want to know. Based on a medical decision with the full involvement of the vice president of the United States.”

“This is not about President Trump; he will face the judgment of the voters,” she added, saying the commission would be permanent. “But he shows the need for us to create a process for future presidents.”

The House speaker’s office has not responded to a request for comment.

Ratified in 1967 after the assassination of President John F. Kennedy, the 25th Amendment allows the president to hand over power voluntarily when “he is unable to discharge the powers and duties of his office.” The vice president would then assume control.

In other cases, the vice president can join the majority of the administration’s top cabinet officials or with “such other body as Congress may by law provide” to usurp the president’s powers, according to the amendment. The body has never been created, and Rep. Jamie Raskin’s (D-Md.) bill is the first to do so.

“Additionally, each party selects a retired statesperson (e.g., former Presidents, Vice Presidents, Attorneys and Surgeons General, Secretaries of State, Defense, and Treasury) to serve. The 10 appointed members then select an 11th member, who acts as the Chair of the Commission,” his office said.