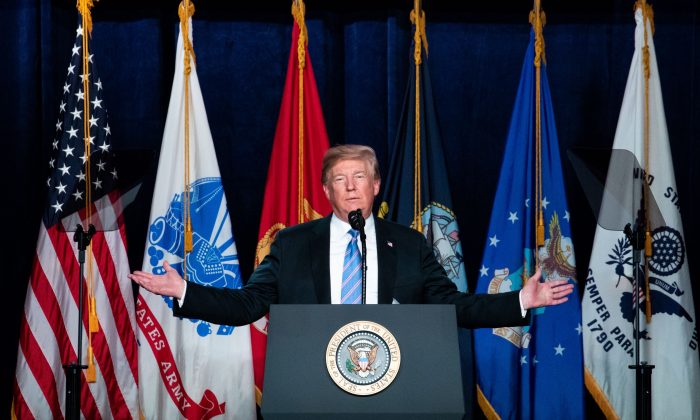 WHITE SULPHUR SPRINGS, W.Va.—President Donald Trump paid tribute to the military on the eve of the nation’s 242nd Independence Day at a “Salute to Service” dinner at The Greenbrier in White Sulphur Springs, West Virginia.

“Let us always remember that we are one people, in one nation, saluting one great American flag.”

Trump received a warm welcome from the festive crowd of veterans from all branches of the military, as well as renowned golfers such as Phil Mickelson and Bubba Watson. The Greenbrier is home to an annual PGA Tour stopover, which doubles as a military tribute.

Trump reminded everyone, as they celebrate the Fourth of July, to think of the military personnel serving overseas.

“We will thank God for blessing us with these unbelievable heroes,” he said.

Trump is hosting a military picnic at the White House on July 4.