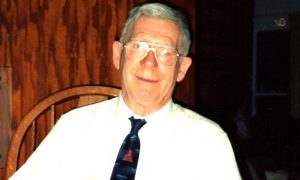 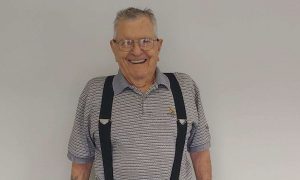 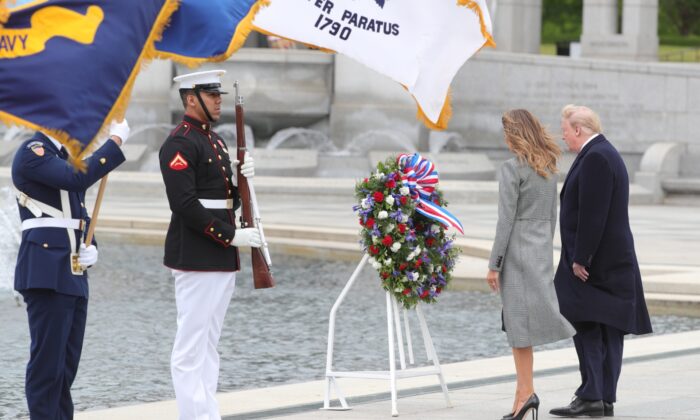 U.S. President Donald Trump and First Lady Melania Trump stand in front of a wreath during a Victory in Europe Day 75th anniversary ceremony at the World War II Memorial in Washington, on May 8, 2020. (Tom Brenner/Reuters)
Trump Presidency

Victory in Europe marked the beginning of oppression for Europeans trapped behind the Iron Curtain: Pompeo
By Ella Kietlinska
Print

President Donald Trump and First Lady Melania Trump laid a wreath at the World War II Memorial in Washington, D.C. today to commemorate the 75th anniversary of Victory in Europe Day (V-E Day) that marks the end of World War II. Seven World War II veterans, ages 96 to 100, joined them at the ceremony.

Seventy-five years ago Nazi German troops throughout Europe unconditionally surrendered to the Allied Powers spelling the end of a global war that started in 1939 with the German invasion of Poland and claimed the lives of 60 to 80 million people.

“Today, we celebrate the forces of freedom who defeated tyranny … we pay tribute to those served for their service and pause to remember those who gave their last full measure in defense of the flames of liberty,” Trump said in his message on the 75th anniversary of V-E Day.

During the commemoration ceremony, President Trump and the First Lady paused and stood silently in front of the Freedom Wall, which features over 4,000 sculpted gold stars, each representing 100 Americans who lost their lives at war, and an inscription saying, “Here we mark the price of freedom.” During WWII, the gold star symbolized family sacrifice.

“The campaign to end fascism in the European Theater is a somber reminder of the price of freedom,” Trump said in his remarks.

Trump said that most of those who lost their lives at the WWII were civilians and among them were 6 million Jews, millions from Poland, and millions from the former Soviet Union.

He also paid tribute to more than 2 million Americans deployed to fight in Europe, the Mediterranean, and North Africa. He said: “Most of these selfless and heroic warriors had never known life in a prosperous America. They grew up during the Great Depression. … Yet, they answered our country’s call of duty because they believed in the principles that lie at the foundation of our Nation.”

End of WWII Day Did Not Bring Freedom to All Europe

Secretary of State Mike Pompeo said in a statement marking the 75th anniversary of V-E Day that for many people who found themselves behind the Iron Curtain as a result of WWII “the end of the war marked the start, or continuation, of a different kind of oppression.” Only after the fall of the Iron Curtain, more people were able to enjoy freedom, he added.

Pompeo and Foreign Ministers of Bulgaria, the Czech Republic, Estonia, Hungary, Latvia, Lithuania, Poland, Romania, and Slovakia said in a joint statement that the central and eastern part of Europe had not enjoyed freedom after the end of WWII and “remained under the rule of communist regimes for almost 50 years.”

Estonia, Latvia, and Lithuania “were illegally occupied and annexed” by the former Soviet Union.

Bulgaria, Czech Republic, Hungary, Poland, Romania, and Slovakia were under the hegemony of the Soviet Union that controlled them “using overwhelming military force, repression,” and the imposition of communist ideology.

The officials said they are “working together toward a strong and free Europe, where human rights, democracy and the rule of law prevail. The future should be based on the facts of history and justice for the victims of totalitarian regimes.”

They asked the international community to “firmly rejecting the concept of spheres of influence,” by respecting the sovereignty of each nation.