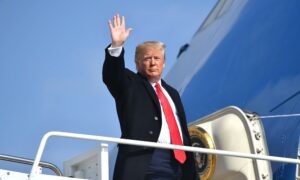 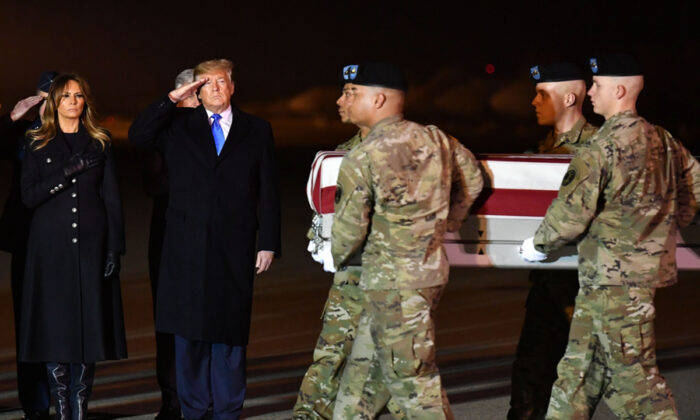 DOVER AIR FORCE BASE, Del.—President Donald Trump paid respects on Nov. 21 to a pair of Army officers who were killed in a helicopter crash in Afghanistan earlier this week.

Trump and the first lady were among a group of dignitaries, including Chairman of the Joint Chiefs of Staff Mark Milley and National Security Adviser Robert O’Brien, who attended the roughly 12-minute ceremony and watched as six white-gloved members of the Army’s Old Guard carefully handled the flag-draped transfer cases holding the soldiers.

Trump and Milley saluted the soldiers, while the first lady and O’Brien stood with their hands over their hearts for the dignified transfer of remains.

Trump has said the responsibility of receiving the remains of fallen U.S. soldiers is “the toughest thing I have to do” as president.

As the final day of public hearings in the House impeachment inquiry wound down, Trump left the White House for the short flight to Dover Air Force Base in Delaware, where the remains of service members killed abroad are returned to U.S. soil.

Knadle, of Tarrant, Texas, and Fuchigami Jr., of Keaau, Hawaii, died Wednesday when their helicopter crashed as they provided security for troops on the ground in Logar Province in eastern Afghanistan.

Both were assigned to Fort Hood, Texas.

The Taliban claimed responsibility for shooting down the helicopter, but the U.S. military has dismissed that as a false claim. The crash remains under investigation.