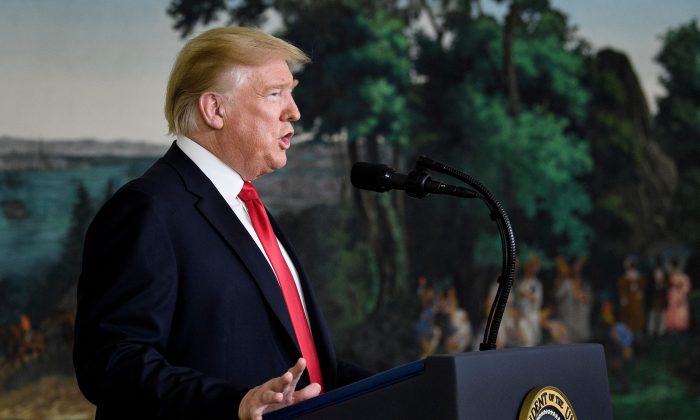 President Donald Trump makes a statement about immigration and the border wall from the diplomatic reception room of the White House on Jan. 19, 2019. (Brendan Smialowski/AFP/Getty Images)
Trump Administration

President Donald Trump laid down a proposal for a border security compromise that would provide temporary protection from deportation to some 700,000 illegal immigrants in exchange for border wall funding.

The proposal also included a list of measures generally supported by both parties, including humanitarian funding, drug detection technology, and extending protections for people who have fled wars and disasters.

House Speaker Nancy Pelosi (D-Calif.) rejected the offer, but her response seemed to leave some room for negotiation.

What is original in the President’s proposal is not good. What is good in the proposal is not original. Democrats will vote next week to add additional border security funding for ports of entry, advanced technology for scanning vehicles for drugs & immigration judges.

Trump and the Democrats failed to reach an agreement on the border wall funding, which lead to some quarter of the federal government to shut down on Dec. 22.

Speaking from the White House on Jan. 19, Trump presented the case for there being a humanitarian crisis at the border, including the statistic that thirty percent of the women who make the trek to the U.S. border suffer sexual assault, which the White House says was reported in 2017 by Doctors Without Borders. He then went over his arguments for border security, such as the fight against drug and human trafficking, criminals sneaking in, and the economic impact of illegal immigrants.

He then presented his proposal, which he called “straightforward, fair, reasonable and common sense, with lots of compromise.”

He retained the demand for $5.7 billion for border wall construction, but repeatedly qualified the plan.

“This is not a 2,000-mile concrete structure from sea to sea,” he said. “These are steel barriers in high-priority locations.”

He invoked the authority of border security officials, who back the need for a barrier.

Trump further called for $800 million for humanitarian assistance, medical support, and new temporary housing at the border. Another $805 million would go to additional drug detection technology at ports of entry, where most of the illegal drugs enter the country.

In a sign of compromise, he offered three years of “legislative relief” for the 700,000 recipients of Deferred Action for Childhood Arrivals (DACA), illegal immigrants brought to the United States as children. The relief would allow for work permits, social security numbers, and protection from deportation.

In September 2017, Trump rescinded DACA, but federal judges in New York and California put his action on hold. Trump previously said he expected his action would be upheld by the Supreme Court, which may rule on the issue sometime this year, perhaps in the summer, he said.

Trump’s proposal further included a 3 year extension of the Temporary Protected Status (TPS), that currently lets people from 10 countries stay in the United States if they left their homes to escape wars, disasters, or “other extraordinary and temporary conditions.”

In July, the administration extended the program for Somalia and Yemen. But it’s scheduled to expire in 2019 for Nepal, South Sudan, and Syria.

Trump ended the program for Sudan, Nicaragua, Haiti, and El Salvador, but again, a federal judge put his decision on hold.

The idea to offer Democrats a DACA and TPS deal in exchange for the wall funding was floated by Sen. Lindsey Graham (R-S.C.), who said Trump found the idea “interesting” after the two lunched on Dec. 31.

The immigration court system is extremely overburdened with a backlog of nearly 900,000 cases.

If Democrats were to accept Trump’s proposal and the government reopened, he pledged to hold weekly bipartisan meetings on broader immigration reform—an issue with bipartisan support, though each party envisions it differently.

Trump said Senate leader Mitch McConnell (R-Ky.) is ready to put legislation enshrining Trump’s proposal to a vote. Republicans would need at least seven Democrat votes to overcome a filibuster in the Senate.

The main hurdle, however, is in the House of Representatives, where Democrats hold majority.

However strained already, Trump’s relationship with Pelosi has been put to further test over the past week.

In an exchange of power moves, Trump denied Pelosi foreign trip using government plane on Jan. 17, when she was already on her way to the airport, leading to an embarrassing moment when she was forced to turn around and later cancel the trip.

Trump appeared to be responding to Pelosi’s withdrawing invitation to Trump for the annual State of the Union address on the House floor. Pelosi cited security reasons, telling Trump to reschedule for after the government reopens, but the Secret Service rebuked the security argument.

In his Jan. 19 remarks, Trump may have taken another jab at Pelosi, saying his proposal wouldn’t affect the availability of foreign workers to “our farmers and vineyards.”

Pelosi and her husband Paul own a Napa Valley vineyard worth at least $5 million, according to Roll Call.

Pelosi’s office didn’t respond to a request for comment.

In an online statement on Jan. 19, Pelosi rejected Trump’s proposal, though her response seemed to offer some ground for negotiation.

“Unfortunately, initial reports make clear that his proposal is a compilation of several previously rejected initiatives, each of which is unacceptable and in total, do not represent a good faith effort to restore certainty to people’s lives,” she said. “It is unlikely that any one of these provisions alone would pass the House, and taken together, they are a non-starter.  For one thing, this proposal does not include the permanent solution for the Dreamers and TPS recipients that our country needs and supports.”

“Dreamers” is another word for illegal immigrants who came to the country as minors.

With his statement on the #TrumpShutdown, it’s clear President @realDonaldTrump realizes that by closing the government and hurting so many American workers and their families, he has put himself and the country in an untenable position. pic.twitter.com/u1XsWb4KBt

Graham previously said that Democrats would have to offer much more than $5 billion for the wall to get a permanent solution for DACA.

Let’s get it done! https://t.co/m8bzYGRLTw

Trump has backed protections, including legal status for the DACA population, before. But in exchange, he wanted $25 billion for the border wall and other security as well as moving the immigration system to one that is more merit-based.

Correction: A previous version of this article misstated the status of Rep. Nancy Pelosi’s trip overseas. She cancelled the trip. The Epoch Times regrets the error.

Update: Further information was added regarding Rep. Nancy Pelosi’s withdrawing invitation to President Donald Trump for the State of the Union address.