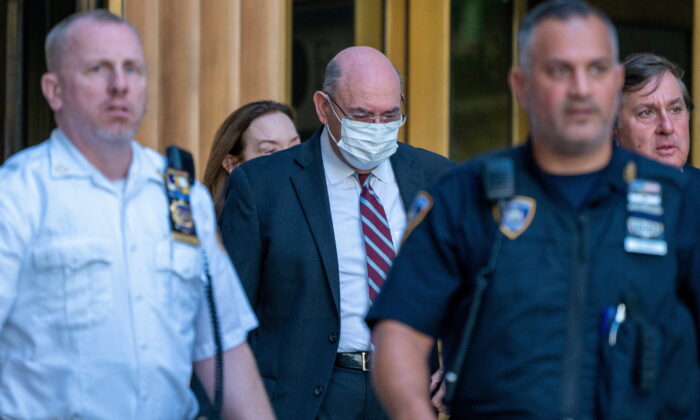 “In one of the most difficult decisions of his life, Mr. Weisselberg decided to enter a plea of guilty today to put an end to this case and the years-long legal and personal nightmares it has caused for him and his family,” Nicholas Gravante Jr., an attorney representing Weisselberg, said in an Aug. 18 statement to media outlets.

“Rather than risk the possibility of 15 years in prison, he has agreed to serve 100 days. We are glad to have this behind him.”

Weisselberg, 75, changed his 2021 plea of not guilty to guilty in a New York state court in Manhattan. He was charged with taking more than $1.7 million in off-the-books compensation from the Trump Organization over several years, including untaxed perks such as rent, car payments, and school tuition.

“Today Allen Weisselberg admitted in Court that he used his position at the Trump Organization to bilk taxpayers and enrich himself,” Manhattan District Attorney Alvin Bragg said in an Aug. 18 statement to media outlets.

The Democrat district attorney noted that the plea deal “directly implicates the Trump Organization in a wide range of criminal activity and requires Weisselberg to provide invaluable testimony” in the upcoming trial.

Weisselberg, who was arrested last July, is the only person to face criminal charges so far in the Manhattan district attorney’s long-running investigation of the company’s business practices. Former President Donald Trump has described the probe and others like it as an ideologically motivated witch hunt designed to harm his political chances.

“The political Witch Hunt by the Radical Left Democrats, with New York now taking over the assignment, continues. It is dividing our Country like never before!” Trump said last year.

His lawyers have said that Weisselberg was punished by the Democrat district attorney’s office because he wouldn’t offer information that would damage Trump.

Prosecutors have said that the company gave untaxed fringe benefits to senior executives, including Weisselberg, for 15 years. Weisselberg alone was accused of defrauding the federal government, state, and city out of more than $900,000 in unpaid taxes and undeserved tax refunds, officials said.

“Allen Weisselberg is a loving and devoted husband, father and grandfather who has worked at the Trump Organization for 48 years. He is now being used by the Manhattan district attorney as a pawn in a scorched earth attempt to harm the former President,” a Trump Organization spokesperson said in a statement at the time. “The district attorney is bringing a criminal prosecution involving employee benefits that neither the IRS nor any other District Attorney would ever think of bringing.”