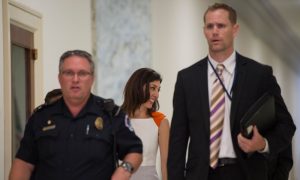 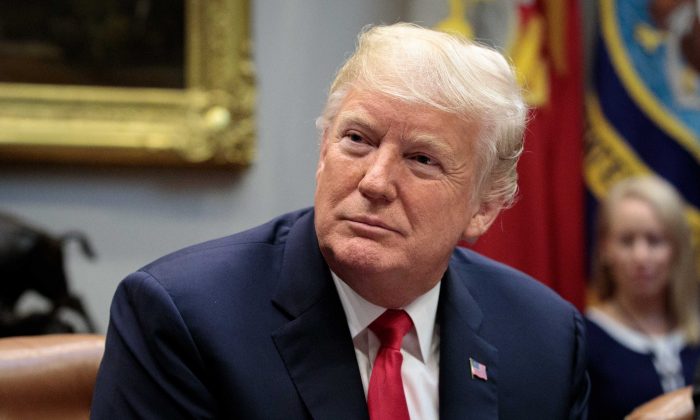 President Donald Trump issued an order on Sept. 17 for the immediate declassification of three series of documents related to the Russia investigation and the spying on his presidential campaign.

The first set of documents relates to the FISA warrant application to spy on Trump campaign adviser Carter Page, specifically pages 10–12 and 17–34 of the June 2017 renewal of the warrant.

The second set of documents relates to a series of FBI interviews with former Associate Deputy Attorney General Bruce Ohr.

The third set of documents encompasses all FBI reports of interviews prepared in connection with the Page FISA applications.

In addition to issuing the declassification order, Trump has directed the Department of Justice and the FBI to publicly release all text messages relating to the Russia investigation of former FBI Director James Comey, former Deputy FBI Director Andrew McCabe, former lead FBI agent on the Russia investigation Peter Strzok, former FBI lawyer Lisa Page, and Ohr. The released texts are to be fully unredacted.

This declassification order is broader than had been anticipated. A declassification of the sequence of redacted pages from the Page FISA documents, along with the Ohr interviews, was assumed to be forthcoming. This order goes much further.

Pages 10–12 of the June 2017 application relate to the Russian government’s efforts to influence the 2016 U.S. presidential election.

Pages 17–34 relate to Page’s coordination with Russian government officials on activities to influence the election. A number of these pages are fully redacted.

House Intelligence Committee Chairman Devin Nunes (R-Calif.) has noted that exculpatory information pertaining to Page was omitted from the FISA applications. The declassification of these sections will likely illustrate whether that did occur.

It’s also possible that more evidence of circular reporting between the FBI and certain journalists may be unveiled.

Trump specifically selected the third and final FISA renewal dated June 29, 2017, as it is the most comprehensive of the four FISA documents, at 121 pages long. It begins on page 292 and ends on page 412 in the provided link.

Ohr participated in a series of 12 known interviews with the FBI between Nov. 22, 2016, and May 15, 2017. Additionally, there have been reports of interviews that continued beyond this timeframe.

The declassification order by Trump does not specify a date range or a specific number of interviews. The chosen wording specifies “all FBI reports of interviews with Bruce G. Ohr prepared in connection with the Russia investigation.”

The FBI interviews may have served as a means for Ohr to transmit information from dossier author Christopher Steele to the FBI. This relationship was noted by Sen. Chuck Grassley (R-Iowa), who said: “The documents also raise questions about the role of Ohr—a senior Justice Department official whose wife worked for Fusion GPS—in continuing to pass allegations from Steele and Fusion GPS to the FBI after the FBI had terminated Steele as a source.”

Ohr recently met with members of Congress and reportedly disclosed that he understood Steele’s information to be raw and uncorroborated hearsay.

The third portion of the order appears to relate to underlying documentation used in the Page FISA warrant, calling for the declassification of “all FBI reports of interviews prepared in connection with all Carter Page FISA applications.”

The requested documentation relates to the initial FISA application and the three subsequent renewals. This portion of the declassification order was somewhat unexpected and will provide a broader examination of reasoning used in obtaining the warrant to spy on Page.

Notably, this portion of the declassification order likely includes debriefings and interviews of lesser-known but still crucial characters, such as FBI informant Stefan Halper, Australian diplomat Alexander Downer, and possibly Maltese professor Joseph Mifsud. It should also include all communications with Steele.

This portion of the declassification order will likely help to establish whether Woods Procedures were followed.

The goal of the Woods Procedures is to ensure accuracy in regard to the following:

It’s the third point in regard to Page that’s particularly important. That’s because Page cooperated with both the FBI and U.S. attorneys for the Southern District of New York in the Evgeny Buryakov case, involving several Russian spies. Page almost certainly was providing testimony or details about Victor Podobnyy in the Buryakov case.

The most unexpected portion of the declassification order calls for the fully unredacted release of all text messages from a number of key players in the Russia investigation.

Even with redactions, a number of material admissions have been discovered within the vast set of Strzok–Page texts. To this mix is being added the previously unreleased text messages from Comey, McCabe, and Ohr.

Given these officials’ involvement in all facets of varying investigations, the texts are likely to provide a lot of new information, including the undisclosed side of previously touched on conversations.

The specific language chosen in the release, “at the request of a number of committees of Congress” and “for reasons of transparency,” likely relates to concerns over establishment of precedent.

White House counsel Emmett Flood had reportedly been against declassification “out of the concern for the precedent it would set, as well as any unintended consequences of making the information public.”

The reference to transparency also touches on Part I, Section 1.7 of Executive Order 13526, which governs classification processes. It states: “In no case shall information be classified, continue to be maintained as classified, or fail to be declassified in order to: (1) conceal violations of law, inefficiency, or administrative error; (2) prevent embarrassment to a person, organization, or agency; (3) restrain competition; or (4) prevent or delay the release of information that does not require protection in the interest of the national security.”

The invocation of Director of National Intelligence Dan Coats is also important. Coats technically maintains oversight of the intelligence community.

The question now becomes how quickly the various agencies will comply with the declassification order. It is likely that there would have been prior coordination and agreements reached in advance of the order. The material question yet to be answered is to what extent an agreement was reached with the DOJ and FBI.

“When the president issues such an order, it triggers a declassification review process that is conducted by various agencies within the intelligence community, in conjunction with the White House Counsel, to seek to ensure the safety of America’s national security interest,” the DOJ said in a statement.

“The department and the Federal Bureau of Investigation are already working with the Director of National Intelligence to comply with the president’s order,” the statement said.

Cooperation by the DOJ and FBI will be crucial, as the agencies still retain full control of the text messages of Comey, McCabe, and Ohr. It is yet to be seen whether they will fully comply with the presidential order.

Attention will now be focused on Rosenstein and FBI Director Christopher Wray throughout the declassification process.