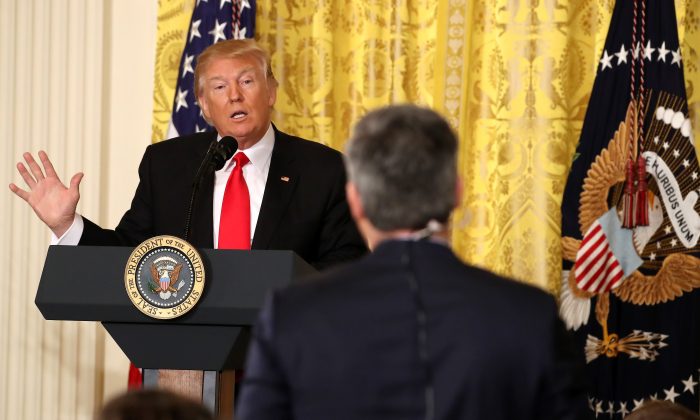 President Donald Trump ordered CNN’s Jim Acosta out of the Oval Office on Tuesday after the network’s controversial White House correspondent kept badgering the president as a press session with reporters wrapped up.

Acosta has become known for repeatedly interrupting the president and members of his staff and using televised question and answer sessions to deliver lengthy monologues.

Tuesday was no exception. Acosta said “Mr. President” loudly three times after the press briefing concluded and Trump thanked everyone present. Once he had the president’s attention, Acosta started firing questions about contested allegations of comments Trump made in a closed-door meeting.

“I want them to come in from everywhere. Everywhere. Thank you very much, everybody,” Trump responded.

As Acosta continued to shout questions, the president pointed at him and said one word: “Out.”

President Trump orders CNN's Jim Acosta to get OUT of Oval Office after latest outburst. pic.twitter.com/n2mxIkBdEn

Acosta has played a large role in CNN’s apparent anti-Trump programming strategy, Fox News reported. The president has branded CNN as “fake news” and has previously referred to the network, and Acosta himself, as such.

Acosta has also been burned by other members of Trump’s team during press briefings. Last month, White House Press Secretary Sarah Sanders cut Acosta off as he attempted to hijack a press briefing. Acosta was saying that reporters make “honest mistakes” but that it doesn’t make them “fake news,” before Sanders cut him short.

“When journalists make honest mistakes, they should own up to them. Sometimes, and a lot of times, you don’t,” Sanders said.

Acosta again tried to interrupt her.

“I’m sorry, I’m not finished,” Sanders said. “There is a very big difference between making honest mistakes and purposefully misleading the American people. You cannot say it’s an honest mistake when you’re purposely putting out information you know is false.”

President Donald Trump announced in a Twitter message that today, Jan. 17, he would hold an awards ceremony for dishonest media.

“The Fake News Awards, those going to the most corrupt & biased of the Mainstream Media, will be presented to the losers on Wednesday, January 17th, rather than this coming Monday,’ Trump tweeted on Jan. 7. “The interest in, and importance of, these awards is far greater than anyone could have anticipated!”