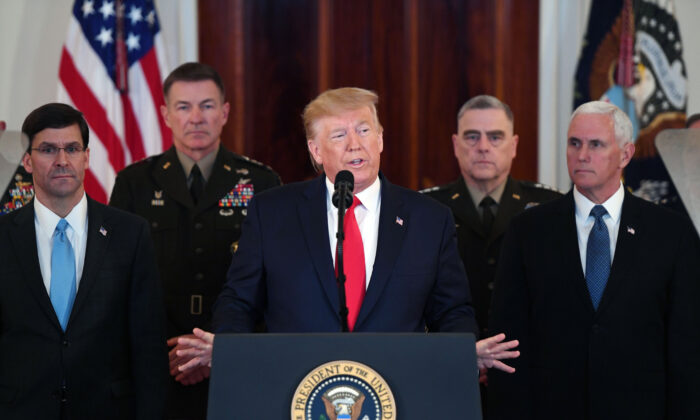 President Donald Trump speaks about the situation with Iran in the Grand Foyer of the White House in Washington on Jan. 8, 2020. Saul Loeb/AFP via Getty Images
By Ivan Pentchoukov

President Donald Trump ordered the imposition of additional sanctions on Iran on Jan. 8 in response to missile strikes a day earlier, which targeted but didn’t harm any U.S. forces in Iraq.

“The United States will immediately impose additional punishing economic sanctions on the Iranian regime. These powerful sanctions will remain until Iran changes its behavior,” Trump, flanked by military officials, told reporters gathered at the White House.

Iran fired missiles at two Iraqi military bases that host American forces on Jan. 8 in response to the killing of Gen. Qassem Soleimani, the head of Iran’s Quds Force. Trump said he authorized the attack on the general, whom he called a “ruthless terrorist,” because Soleimani was plotting an imminent attack on American citizens.

As Iran vowed to avenge Soleimani’s killing, Trump warned the Islamic regime that the United States would respond swiftly. With no Americans harmed, Trump opted for sanctions and said he was ready for peace.

“To the people and leaders of Iran: We want you to have a future and a great future—one that you deserve, one of prosperity at home, and harmony with the nations of the world. The United States is ready to embrace peace with all who seek it,” Trump said.

Trump didn’t offer details on the sanctions. The Treasury Department didn’t respond to a request by The Epoch Times for details.

According to the president, Iran’s attacks didn’t harm any Americans because of “precautions taken, the dispersal of forces, and an early warning system that worked very well.”

Iran appeared to have crossed an unspoken line when one of its proxy terrorist groups in Iraq killed an American contractor. After U.S. forces responded with airstrikes against the terrorists, the group’s supporters stormed the U.S. embassy in Baghdad. Shortly after, a U.S. drone strike killed Soleimani, along with the leader of the umbrella group of Iran’s proxies in Iraq.

“The Trump administration has finally drawn some very proper and legal and strategically smart red lines that, if crossed by Iran, will result in serious damage to the Iranian terrorist machine,” said Peter Huessy, the president of defense consulting firm GeoStrategic Analysis.

“It is also long since past the time when our NATO and all our Middle East allies took more seriously the threat from Iran—and took the necessary action to deter and defeat Iranian action, and work toward the day when the Iranian people take action to ensure the mullah regime is no more.”

Trump said that Iran appears to be standing down from further attacks. Iranian Foreign Minister Mohammad Javad Zarif wrote on Twitter that the country had “concluded proportionate measures in self-defense.”

Emma Ashford, a research fellow at the Cato Institute, welcomed the de-escalation.

“Trump may have been in many ways responsible for the ongoing tensions with Iran, but, much as he did with North Korea, he has chosen at the last minute to seek a more conciliatory approach,” Ashford said in a comment to The Epoch Times via email.

“By choosing not to respond to Iranian strikes with further military action, thankfully, the president has given the United States a window to reflect and try to figure out how to avoid further conflict.”

Trump said he will ask NATO to get more involved with the Middle East. The president also underlined the size and strength of the U.S. military, but emphasized that the power is best used as a deterrent.

“The fact that we have this great military and equipment, however, does not mean we have to use it. We do not want to use it,” Trump said. “American strength, both military and economic, is the best deterrent.”

During the speech at the White House, the president referred to Soleimani as “the world’s top terrorist.” The Quds Force, which Soleimani led, is part of the Islamic Revolutionary Guard Corps, which the United States designated as a terrorist group in 2019.

Trump accused Soleimani of orchestrating the recent attacks on Americans in Iraq and the assault on the U.S. Embassy.

“He trained terrorist armies, including Hezbollah, launching terrorist strikes against civilian targets. He fueled bloody civil wars all across the region. He viciously wounded and murdered thousands of U.S. troops, including the planting of roadside bombs that maim and dismember their victims,” Trump said.

Tensions with Iran began to escalate after Trump exited the multinational nuclear deal secured by the Obama administration. Trump reimposed tough sanctions on the Islamic regime, crippling its economy and contributing to widespread protests. The president had long criticized the 2015 Iran nuclear deal as a failure. He said during his speech on Jan. 8 that the money Iran received as part of the agreement was used to build the missiles that were fired at U.S. forces on Jan. 7.

Trump made the statement as Democrats in Congress pushed for details on the intelligence that led to the decision to kill Soleimani. Following Trump’s speech, Senate Minority Leader Chuck Schumer (D-N.Y.) condemned the attacks but noted that the United States doesn’t seek war.

“I condemn the attack by the Iranian government and remain concerned about the risk of a further escalation of hostilities in the Middle East,” Schumer said on the floor of the Senate. “The American people do not want a war with Iran and the president does not have the authority to wage one.”

Republicans are backing the president’s decision to impose sanctions.

“The United States does not seek conflict but is prepared to protect American lives and interests. Iran should not question our collective will by launching further attacks,” said Senate Majority Leader Mitch McConnell (R-Ky.)

“‘Peace through strength’—That was the Reagan doctrine, and that is the measured approach we are seeing from the Trump administration today,” House Minority Leader Kevin McCarthy (R-Calif.) wrote on Twitter.

“Thank you to our President and to our courageous troops for returning America to a position of respect and admiration around the world.”