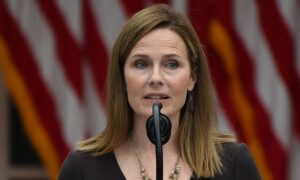 “Biden and Democrats just clarified the fact that they are fully in favor of (very) LATE TERM ABORTION, right up until the time of birth, and beyond – which would be execution. Biden even endorsed the Governor of Virginia, who stated this clearly for all to hear,” he added in another missive. “GET OUT AND VOTE!”

Virginia Gov. Ralph Northam, a Democrat, last year appeared to say that killing a baby who had already been born would be fine under a state legislative proposal. A number of Democrat lawmakers support abortion up until birth, a position supported by a minority of Americans, according to surveys.

Biden during a town hall in Florida on Monday night said he would push to enact legislation that would give access to abortions if the Supreme Court overturns Roe v. Wade.

The 1973 Supreme Court ruling made access to abortion a constitutional right.

Biden said the expectation is that the Supreme Court could soon move to overrule the ruling.

“And the only thing, the only responsible response to that would be to pass legislation making Roe the law of the land. That’s what I would do,” he said.

The town hall then went into a commercial break and the topic was not broached again.

Biden and Trump clashed over the ruling during their first debate last week.

“The point is that the president also is opposed to Roe v. Wade. That’s on the ballot as well and the court, in the court, and so that’s also at stake right now,” Biden said.

“It’s on the ballot in the court,” Biden said.

No abortion-related cases are on the Supreme Court docket, though court watchers believe abortion cases will arrive before the court in the future.

Trump and some other Republicans have also said it isn’t clear whether Amy Coney Barrett, Trump’s Supreme Court nominee, would vote to overturn Roe v. Wade if the matter arose.

Barrett as a federal judge joined in a dissent that targeted a law that banned abortions for sex, race, and disability reasons, arguing the Supreme Court has never ruled on such a law, leaving interpretation to lower courts for now.

She also opposed the overturning by a court of an abortion law that would have required parents be notified when a girl under 18 is seeking an abortion.

Many Democrats and some Republicans believe Barrett would vote to overturn Roe v. Wade.

“Republicans have made perfectly clear they want to rush Judge Barrett onto the Supreme Court so she can dismantle the right to safe, legal abortion. Not on my watch and not if women and men across the county have anything to say about it,” Sen. Patty Murray (D-Wash.), ranking member of the Senate Health, Education, Labor, and Pensions Committee, said in a recent statement.