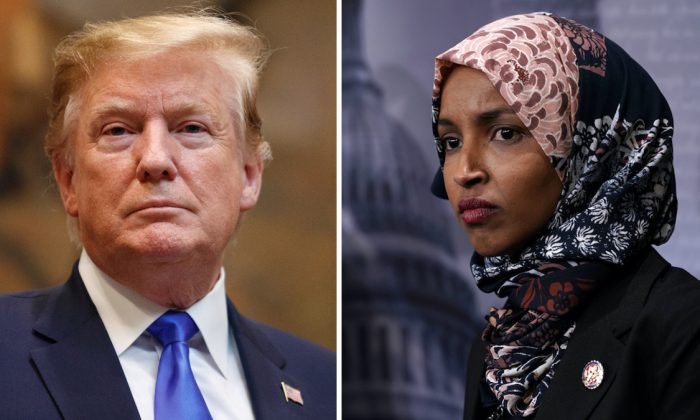 Trump on Omar’s Alleged Marriage Fraud: ‘I Hear She Was Married to Her Brother’

President Donald Trump noted that Rep. Ilhan Omar (D-Minn.) was allegedly married to her brother, a claim that hasn’t been fully substantiated but that some evidence indicates may be true.

“There’s a lot of talk about the fact that she was married to her brother,” Trump said in response to a question on July 17 before departing Washington to a rally.

“I know nothing about it. I hear she was married to her brother,” he added.

“You’re asking me a question about it. I don’t know, but I’m sure that somebody would be looking at that.”

President Donald Trump on Rep. Ilhan Omar (D-MN): “There’s a lot of talk about the fact that she was married to her brother. I know nothing about it. … I’m sure that somebody would be looking at that” pic.twitter.com/U6Vs7UpblZ

Claims that Omar married her brother in order to get him citizenship have been extensively examined by several blogs and media outlets.

After Trump’s remarks, PJ Media reporter David Steinberg directed readers to four of his articles, including one that includes pictures he obtained from a yearbook in St. Paul that seemed to match to a man seen in a picture with Omar that he shared in 2016. That man was named as Ahmed Nur Said Elmi.

Another article from Steinberg said records showed that Elmi, Omar’s apparent brother, and her second husband, Ahmed Hirsi, all lived together in North Dakota for several years. Yet another article was said to support the claim that Elmi is Omar’s brother.

Elmi told another website, Alpha News, that he was in some of the photographs cited but claimed that he had never been married to anyone and did not know who Omar was.

“I can’t even begin to recall who those people are, to be honest. I’m sure we were introduced, but I wasn’t even aware that the picture existed,” he said about a picture in which he and Omar are standing near each other smiling.

The website cited multiple sources “inside the close-knit Somali community that Ilhan Omar and Ahmed Nur Said Elmi are indeed brother and sister.”

According to the website, the U.S. Attorney’s Department said it would not be investigating the alleged marriage fraud.

Omar was ordered in June to repay thousands of dollars for violating campaign finance rules after a probe by Minnesota’s Campaign Finance and Public Disclosure Board (pdf) revealed she had made some payments to her lawyer for assisting with her tax returns.

The payment, $1,500, was for services related to 2014 and 2015 joint tax returns for her and her current husband, Ahmed Hirsi, who she married in 2018. A second payment of $750 noted in the probe was to made to Omar’s lawyers for obtaining immigration records.

According to marriage records in Minnesota’s Hennepin County, Omar applied for a license in 2002 to marry her current husband, reported the Associated Press. Omar said that she and Hirsi, who was going by the name Ahmed Abdisalan Aden at the time, did not get a marriage certificate but were married in their Muslim “faith tradition.”

Omar said she and Hirsi split in 2008 after they had two children together, after which she married Elmi who she said is a British citizen on Feb. 12, 2009, according to a marriage certificate.

Omar said she and Elmi split in 2011 but they didn’t officially get divorced until 2017. Omar and Hirsi got back together in June 2012, according to divorce records. Omar and Hirsi got married in early 2018, about a month after the divorce from Elmi was finalized.

Omar released a statement about the accusations about marriage fraud.

“Insinuations that Ahmed Nur Said Elmi is my brother are absurd and offensive,” Omar said in the statement in 2016, which was published in full by Fox 9.

She said the timeline she offered was for “clarity” and that she hoped “we can put these rumors to rest.”

Responding to a lengthy piece recently published in the Minneapolis Star-Tribune that recapped the investigations by the blogs and media outlets, Omar spokesman Jeremy Slevin told the outlet that the alleged marriage fraud was a “conspiracy theory.”

“Ilhan has shared more than most public officials ever do about the details of her personal life—even when it is personally painful,” he continued. “Whether by colluding with right-wing outlets to go after Muslim elected officials or hounding family members, legitimate media outlets have a responsibility not to fan the flames of hate. Continuing to do so is not only demeaning to Ilhan, but to her entire family.”