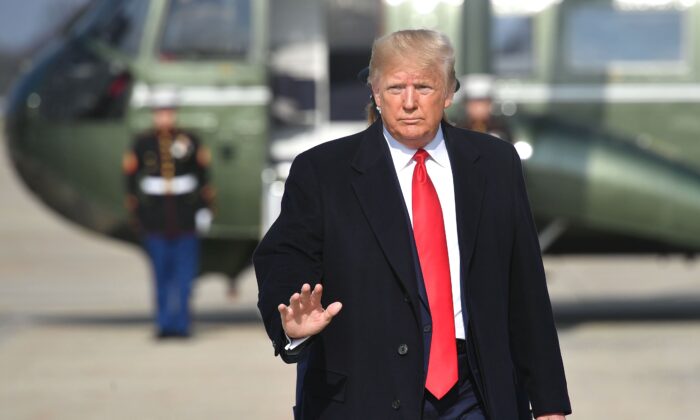 Trump on Impeachment: ‘I Want a Trial’ in the Senate

President Donald Trump said Friday that he wants a Senate impeachment trial should the House vote to impeach him.

“I want a trial,” Trump told “Fox & Friends” in a morning interview. “There’s nothing there.”

His remark confirmed a Thursday night statement from a White House spokesman, who said that Trump would also like to see Hunter and Joe Biden, the whistleblower, Rep. Adam Schiff (D-Calif.), and others testify in the Senate.

“We wanna call the whistleblower. But you know who I want as the first witness, because frankly, I want a trial,” he said.

“There should never be an impeachment, that phone call was totally appropriate,” Trump said.

Over the past several weeks, the House Intelligence Committee led by Schiff has held public hearings with witnesses in the impeachment inquiry, attempting to probe whether Trump misused his power by asking Ukraine to investigate the Bidens and alleged 2016 election interference. Trump, Vice President Mike Pence, Ukrainian President Volodymyr Zelensky, Ukraine’s foreign minister, and other White House officials have denied allegations of quid pro quo and bribery.

Some witnesses who were called to testify claimed there was quid pro quo. However, none of them were directly told by the president or other officials about it.

A few Republican senators have raised the prospect of not holding the Senate trial. However, Senate Majority Leader Mitch McConnell (R-Ky.) has repeatedly maintained that a trial will be held, per the Senate’s rules.

“Well, there’s only one person I want more than Where’s Hunter,” Trump said, correlating Hunter Biden to the children’s book, “Where’s Waldo.” He added: “And that person is Adam Schiff.”

“I want to see Adam Schiff testify about the whistleblower who was a fake whistleblower,” Trump said, adding that the complaint “bore no relationship to his call.”

“The whistleblower, in my opinion, is a political operative,” the president added in the interview.

Republicans and Trump have claimed that the whistleblower may have colluded with Democrats to ultimately bring the impeachment inquiry about. Democrats have denied the claim and said that whistleblower protection measures should be adhered to.

Several top Republican senators, meanwhile, have signaled that they would call the Bidens and the whistleblower.

One of them is Senate Judiciary Committee Chairman Lindsey Graham (R-S.C.), who sent a letter (pdf) to Secretary of State Mike Pompeo on Thursday requesting documents related to Biden and his communications with Ukrainian officials.

He is trying to access any calls Biden may have made to Petro Poroshenko, a former Ukrainian president, about the firing of Ukraine’s top prosecutor as well as any references to Burisma.

Such documents will “assist in answering questions regarding allegations that Vice President Biden played a role in the termination of Prosecutor General [Viktor] Shokin in an effort to end the investigation of the company employing his son,” he said.

In the interview, Trump also suggested that Energy Secretary Rick Perry issue a statement on his dealings with Ukraine.

“Frankly, I’d like Rick to make a statement and Rick would make his debut, I think you already made a statement,” he said, referring to Perry.

He also said he hardly knows U.S. Ambassador to the European Union Gordon Sondland, who said he has spoken to the president on Ukraine affairs. Sondland offered his testimony earlier in the week.

“I’ve had a couple of conversations, I’ve seen him hanging around, you know, when I go to Europe, but he was really a European Union ambassador, and all of a sudden, he is working on this, you know, ask about that,” the president said.