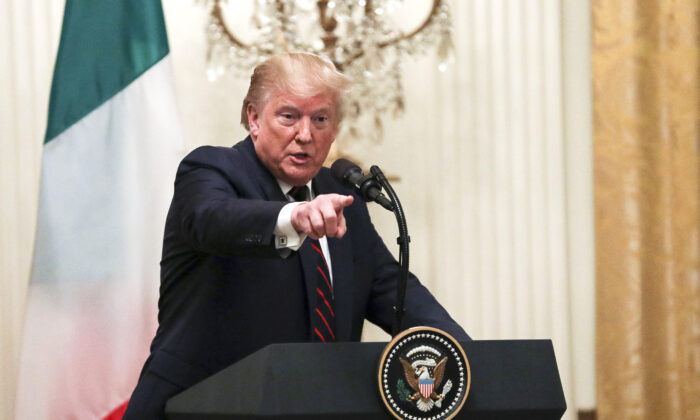 President Donald Trump said that whatever happens between Turkey and Syria is between those countries and doesn’t involve the United States.

Trump, speaking in the Oval Office on Oct. 16, said there were no American soldiers left in northern Syria about one week after he announced the withdrawal of American forces as part of an attempt to end what he calls “endless wars.”

Responding to criticism that America is leaving behind the Kurds, who helped the United States demolish ISIS, Trump said he thinks the Kurds will be fine.

“Syria and Turkey may fight. Syria is friendly with the Kurds. The Kurds are very well protected, plus they know how to fight, And by the way, they’re no angels, but they were with us,” he said.

“Syria is either negotiating with or talking to Turkey. We’re also talking to Turkey. We put massive sanctions on Turkey. Sanctions work, frankly, better than fighting, certainly when you’re down to 28 people. We’re not going to be fighting, we don’t want to fight anyway, I don’t think there’s any reason to, from the United States’ standpoint,” he added.

Trump reiterated his view that the fighting in the region does not involve the United States.

In general, the commander-in-chief asserted that the United States military is spread too thin.

“We’re in 90 counties all over the world policing,” he said. He hopes to fix that, saying reform efforts will save lives and money.