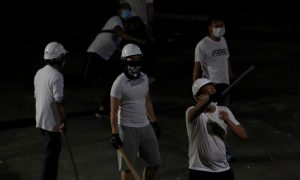 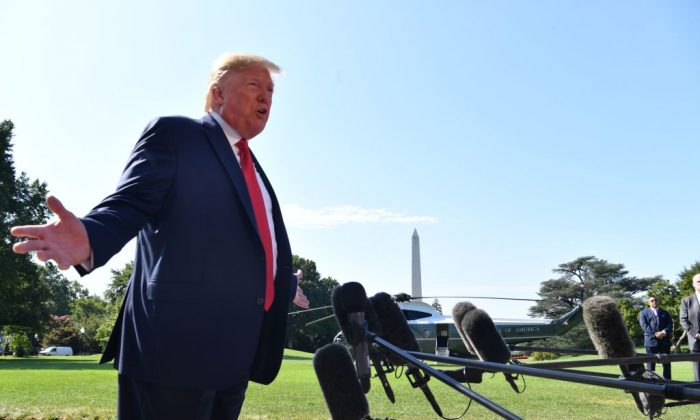 President Donald Trump speaks to the press on the South Lawn of the White House before departing in Washington on Aug. 9, 2019.(NICHOLAS KAMM/AFP/Getty Images)
US News

Trump on China: ‘I’m Not Ready to Make a Deal’

WASHINGTON—President Donald Trump said Aug. 9 he isn’t ready to strike a trade deal with Beijing, criticizing the Chinese regime for manipulating its currency and reneging on its pledges.

“They would like to make a deal. I’m not ready to make a deal,” Trump told reporters at the White House before his departure for fundraising events in New York.

“China wants to settle this deal. They’ve had the worst year that they’ve had in many, many decades. And it’s getting only worse. Thousands of companies are leaving China,” he said.

The next round of trade talks with the Chinese delegation is planned to take place in Washington next month.

When asked if he would cancel the next meeting, Trump said, “Maybe, I will see what happens. Right now, the talks are scheduled in September. … Whether or not they’re canceled, we’ll see.”

U.S. and Chinese trade representatives met July 30 in Shanghai for two days of talks, described by both sides as “constructive.” They were the first in-person meetings since negotiations broke down in early May.

After the meeting, however, Trump announced on Aug. 1 that he would impose 10 percent tariffs on an additional $300 billion worth of Chinese goods. He accused the Chinese regime of failing to deliver on its pledges to buy more U.S. agricultural products and to stem the flow of the synthetic opioid fentanyl into the United States.

Trump has repeatedly accused China of backtracking on its commitments and delaying the talks in the hopes of making a more favorable trade deal with a Democratic president after the 2020 U.S. presidential election.

“I spoke to Chuck Schumer. We had a great talk. And Chuck Schumer, in particular, loves my China policy, as you probably know. I said, ‘I can’t believe it. You actually like something that I’m doing.’ He said, ‘Not like, love.'”

Trump also noted that the United States wouldn’t do business with Huawei.

“I really made the decision. It’s much simpler not to do any business with Huawei,” he said. “That doesn’t mean we won’t agree to something if and when we make a trade deal.”

The U.S. Commerce Department clarified that Trump’s comment about Huawei referred only to government purchases. The department told CNBC that it’s still on track to process special licenses for U.S. companies to resume sales to the Chinese tech company.

The Commerce Department in May added Huawei to its “Entity List” over national security concerns, preventing it from acquiring components and technology from American firms without government approval. At the G-20 Osaka summit in June, Trump announced that the United States would ease restrictions on Huawei.

In an effort to offset the effects of U.S. tariffs, China recently devalued its currency. That prompted the United States to label Beijing a currency manipulator. On Aug. 5, the Chinese renminbi weakened to its lowest level since 2008, slipping to more than 7 per dollar.

Trump said when the Chinese regime devalues its currency, that also offsets price increases in the United States, which ends up helping U.S. consumers.

“The American taxpayer is not paying for it,” Trump said. “What China is doing is, by depressing their currency and by pouring tremendous amounts of money into their system, they’re paying for it.”

“The prices have not gone up. In fact, we have virtually no inflation in our country.”

For more than a decade, the central bank of China had maintained the exchange rate between 6 and 7 yuan per dollar. But on Aug. 5, the yuan dropped almost 2 percent in one day, reaching 7.053 per dollar. That triggered concerns that the trade dispute will spill over into a currency war.

By keeping its currency undervalued, China can boost its exports and build trade surpluses.

Governments use their own domestic currencies as a trade tool in order to gain a competitive advantage in international trade. Washington has long fought to deter currency manipulation, arguing that it has led to the loss or displacement of millions of American jobs.

When asked if the United States would devalue the U.S. dollar in response to China’s action, Trump said, “No, we don’t have to.”

A strong dollar puts U.S. manufacturers at a competitive disadvantage, he said. However, if the Federal Reserve continues to reduce rates, “that would automatically bring down the dollar a little bit and it would make it easier” for the American manufacturers to sell goods overseas, he said.

Trump said he would love to see further rate cuts from the Fed.

“We have a rocket ship. I mean we’re doing well without it [rate cut], but we’re being handcuffed by the Federal Reserve.”