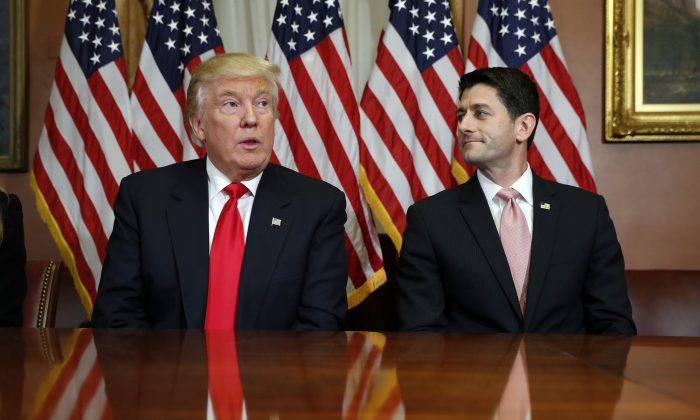 President-elect Donald Trump and House Speaker Paul Ryan of Wis., pose for photographers after a meeting in the Speaker's office on Capitol Hill in Washington on Nov. 10, 2016. (AP Photo/Alex Brandon)
Politics

Donald Trump on Sunday reiterated that he will not take a salary as president, adding that he will also not take vacations while in office.

In an interview with CBS’ “60 Minutes,” Trump said, “There’s just so much to be done. So I don’t think we’ll be very big on vacations, no.”

Republicans have criticized President Obama for playing golf on family vacations. Before that, Democrats criticized former President George W. Bush for his vacation time during his tenure.

According to Forbes magazine, Trump is worth about $3.7 billion, making him the 324th richest person in the world.

Trump will be sworn in as president on Inauguration Day, January 20, 2017.

“This was just going to be a quick little chat and it lasted close to an hour and a half. And it could have gone on for four hours,” Trump said of his meeting with the president. “I mean it was, just—in fact, it was almost hard breaking it up because we had so many things to say. And he told me—the good things and the bad things, there are things that are tough right now”

Obama, he added, is “very smart and very nice.”