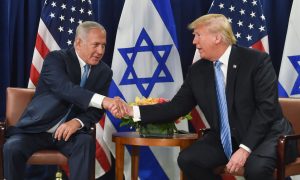 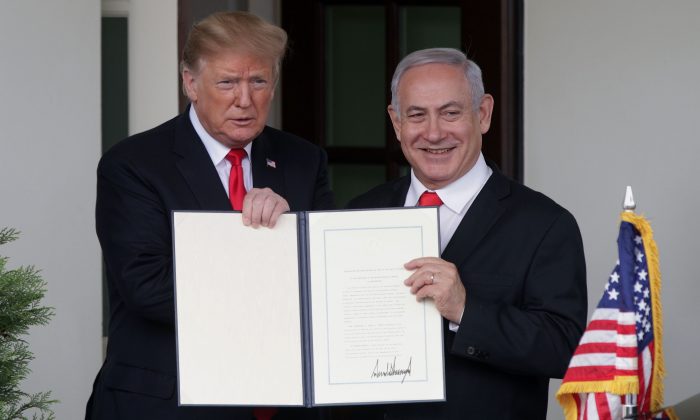 President Donald Trump has issued a proclamation stating that the United States recognizes the Golan Heights as part of the State of Israel.

“The State of Israel took control of the Golan Heights in 1967 to safeguard its security from external threats,” the March 25 proclamation states. “Today, aggressive acts by Iran and terrorist groups, including Hizballah, in southern Syria continue to make the Golan Heights a potential launching ground for attacks on Israel. Any possible future peace agreement in the region must account for Israel’s need to protect itself from Syria and other regional threats. Based on these unique circumstances, it is therefore appropriate to recognize Israeli sovereignty over the Golan Heights.”

Trump hinted at the move in a March 21 tweet, saying: “After 52 years it is time for the United States to fully recognize Israel’s Sovereignty over the Golan Heights, which is of critical strategic and security importance to the State of Israel and Regional Stability!”

Israeli Prime Minister Benjamin Netanyahu expressed gratitude to Trump for making the move while talking to press during the March 25 bilateral meeting between the two.

“I’ve met many friends of Israel in this office. But as I said in the other room, just now, in a day of history, we have never had a greater friend than President Trump,” Netanyahu said.

Golan Heights is a strip of land about 40 miles by 12 miles, east of the upper Jordan River. It was part of Syria until 1967, when it was taken over by the Israeli military during the Six-Day War. Israel annexed the land in 1981 and has maintained that it needs to retain control over the area because it otherwise would be used to launch attacks on Israel.

Syria has been in a perpetual dispute with Israel over the land.

“This should have been done, I would say, numerous presidents ago,” Trump commented on the declaration during the meeting with Netanyahu. “But for some reason, they didn’t do it, and I’m very honored to have done it.”

The prime minister used the opportunity to reaffirm Israel’s commitment as a U.S. ally.

Trump has reaffirmed and strengthened the alliance with Israel while in office, stirring the pot of volatile status quo between the Jewish state and Palestine, a state unrecognized by the United States that claims the West Bank and Gaza Strip territories and considers Jerusalem its capital. Israel took over those territories in the Six-Day War.

On Feb. 23, 2018, Trump announced that the U.S. Embassy in Israel would move to Jerusalem. The embassy officially relocated on May 14, 2018, on the 70th anniversary of the Israeli Declaration of Independence.

The relocation was originally mandated by Congress in the Jerusalem Embassy Act passed in 1995. Presidents had been since delaying it every six months on national security grounds.

The Trump administration also withdrew the United States from UNESCO, due to the U.N. agency’s bias against Israel. Following the decision, Israel also announced it would withdraw from the organization.

Trump’s daughter, Ivanka Trump, married Jared Kushner, a conservative Jewish man, and converted to Judaism; both are senior advisers at the White House.

More than two-thirds of Americans maintain a largely positive view of Israel, a February Gallup poll showed, although support for the Jewish state’s side in the Israeli-Palestinian conflict has somewhat diminished among liberals, Democrats, and even moderate and liberal Republicans.