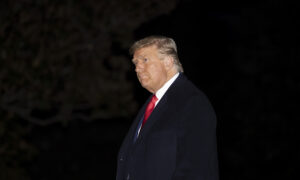 Trump's Security Adviser: China Is the Threat of the Century
0 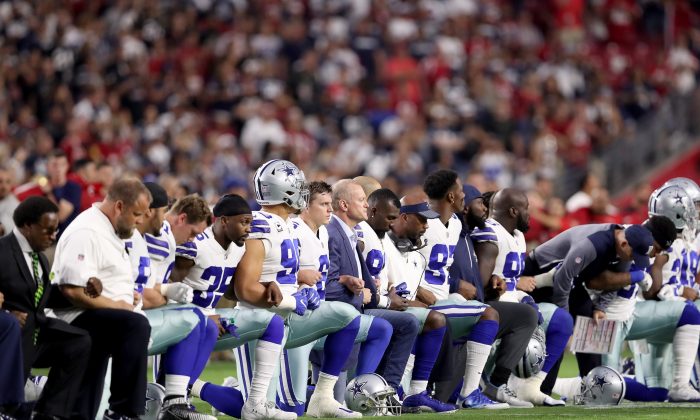 Members of the Dallas Cowboys take a knee before the start of the national anthem at an NFL game against the Arizona Cardinals at the University of Phoenix Stadium in Glendale, Arizona, on Sept. 25, 2017. (Christian Petersen/Getty Images)
Trump Administration

Trump sent his suggestion in a Twitter message on Tuesday morning.

“The NFL has all sorts of rules and regulations,” the president wrote. “The only way out for them is to set a rule that you can’t kneel during our National Anthem!”

The first NFL player to kneel for the National Anthem was Colin Kaepernick, who said he was protesting racial injustice and police brutality.

Trump has said that he takes issue with kneeling because it is disrespectful to the United States and the flag.

“The issue of kneeling has nothing to do with race,” the president wrote in a message on Twitter on Sept. 25. “It is about respect for our Country, Flag, and National Anthem. NFL must respect this!”

According to Deadline, the ratings for “Sunday Night Football,” which saw the Oakland Raiders play the Washington Redskins, dropped 11 percent from last season’s Week 3 matchup, which saw the Chicago Bears play the Dallas Cowboys. This Sunday’s Redskins-Raiders game averaged an 11.6 Nielsen rating, which means 11.6 percent of households tuned in for the game. The ratings are also an 8 percent drop from last week’s “SNF” game between the Green Bay Packers and the Atlanta Falcons.

Ratings for NFL overall have continued to decline as well.

Last season, a common explanation for the drop in ratings from executives was there was an unprecedented interest in the U.S. presidential election. Some polls, however, found that the protests during the national anthem were a primary factor in declining viewership.

A JD Power survey, according to ESPN, discovered that “anthem protests were the top reason that NFL fans watched fewer games last season.”

“Twenty-six percent of those who watched fewer games last season said that national anthem protests, some of which were led by Colin Kaepernick, were the reason,” ESPN said, citing the survey.