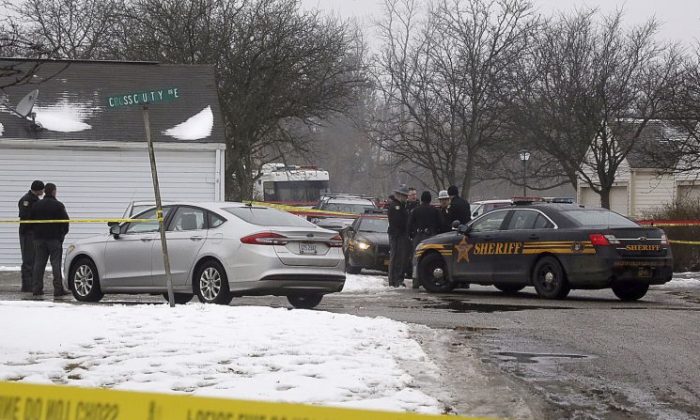 Police investigate the scene of a shooting in Westerville, Ohio, on Saturday, Feb. 10, 2018. Westerville police have confirmed that two officers have been fatally shot at a home in the Columbus suburb. A police statement says the officers responded to a 911 hang-up call around 11:30 a.m. and were shot after they arrived at a residence. A suspect is reportedly in custody. (Tom Dodge/The Columbus Dispatch via AP)
Crime and Incidents

President Donald Trump extended his prayers to two police officers killed in the line of duty in Westerville, Ohio, on Saturday, Feb. 10.

My thoughts and prayers are with the two police officers, their families, and everybody at the @WestervillePD. https://t.co/AoingY77Ky

The two officers were killed while responding to a 911 call, according to the City of Westerville and media reports.

“It is with a heavy heart we report a second Westerville officer has been killed in the line of duty,” the City of Westerville wrote on its official Twitter account. “We will share more details here as it becomes available.”

The killings occurred around 11:30 a.m. at Crosswind drive, according to 10 TV.

The local police department told Fox News that the two officers were responding to a 911 hang-up call.

The suspect was reportedly shot and taken into police custody, according to Fox 28. No word is yet available on the suspect’s condition.

“We are indebted to the brave men and women who don the blue and the badge day in and day out to keep our communities safe,” he continued. “Sometimes, those officers don’t make it home at the end of a shift. Now is one of those times and we – as a community – must rally behind the families and fellow officers.”