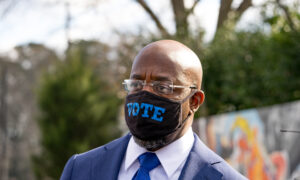 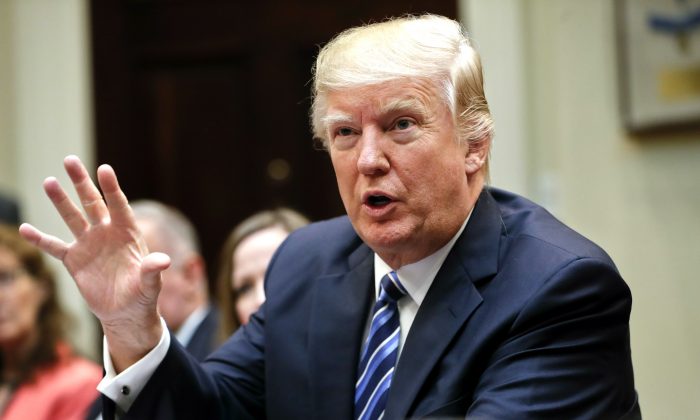 President Donald Trump speaks during a meeting on healthcare in the Roosevelt Room of the White House in Washington on March 13, 2017. (AP Photo/Pablo Martinez Monsivais)
Politics

The benefits of replacing the Affordable Care Act (also known as Obamacare) with a more market-oriented system will take one to two years to manifest, President Donald Trump said during a March 13 listening session with people hurt by healthcare plan.

“More competition and less regulation will finally bring down the cost of care,” Trump said. “Unfortunately, it takes a while to get there because you have to let that marketplace kick in. And it’s going to take a little while to get there. Once it does it’s going to be a thing of beauty. I wish it didn’t take a year or two years, but that’s what’s going to happen and that’s the way it works.”

The Republicans are working on passing a bill to replace Obamacare, but the bill is limited to only what can be achieved through the process of reconciliation, which is limited to changing budget appropriations. This way no filibuster in the Senate is possible; it can pass with a simple majority.

That’s why the bill does not fulfill some of Trump’s promises, such as medical tort reform or enabling insurance to be sold across state lines. Such changes are expected in another bill that will need bipartisan support to pass.

Trump reiterated that replacing Obamacare is necessary, not politically sly, because if it works, it will shield Democrats from facing the negative fallout of Obamacare.

However, that administration also announced health insurance premiums offered through Obamacare would increase by 25 percent in 2017, while the number of insurance plans available would decrease by a third.

Some of the biggest health insurances companies—Aetna, UnitedHealthCare, and Humana—have pulled out of most exchanges, leaving many states with only a single insurer.

This rise in price and narrowing of options could worsen as more young and healthy people choose not to pay such high premiums, making the Obamacare health insurance exchanges even more financially unstable and possibly leading to what actuaries call a death spiral. The structure of Obamacare depended on contributions of the young and healthy to subsidize payouts to the old and the sick.

But the replacement bill faces challenges. Leaders of the House Freedom Caucus and the Republican Study Committee have come out against the bill, as has Kentucky Senator Rand Paul. They favor a bill that would completely repeal Obamacare, followed by discussions on what a replacement bill would look like. Trump has promised to play an active role in urging Congress to pass the bill.