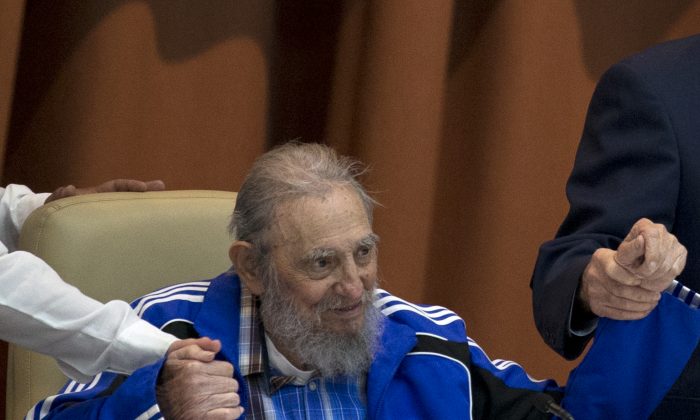 In this April 19, 2016 file photo, Fidel Castro sits as he clasps hands with his brother, Cuban President Raul Castro, right, and second secretary of the Central Committee, Jose Ramon Machado Ventura moments before the playing of the Communist party hymn during the closing ceremonies of the 7th Congress of the Cuban Communist Party, in Havana, Cuba. (Ismael Francisco/Cubadebate via AP)
US

President-elect Donald Trump and President Barack Obama both released statements on the death of Cuban communist dictator Fidel Castro, who died at the age of 90 on Saturday.

Their responses were very different, providing one of the most pointed examples of Obama’s and Trump’s worldviews.

“Fidel Castro is dead!” Trump tweeted on Saturday to his millions of Twitter followers. He later slammed Castro’s regime. “Fidel Castro’s legacy is one of firing squads, theft, unimaginable suffering, poverty and the denial of fundamental human rights,” Trump said in a statement.

Obama, meanwhile, noted that Castro’s death would be met by “powerful emotions,” namely from Cubans, saying that only history can “record and judge the enormous impact of this singular figure on the people and world around him.”

He added there were “countless ways in which Fidel Castro altered the course of individual lives, families, and of the Cuban nation,” without touching the Castro regime’s poor human rights record. He concluded that Cubans “have a friend and partner in the United States of America.”

Human rights organization Amnesty International took a more measured approach, saying that health and education access increased under Castro, but pointed out the significant human rights abuses carried out by his long-reigning regime.

“Access to public services such as health and education for Cubans were substantially improved by the Cuban revolution and for this, his leadership must be applauded. However, despite these achievements in areas of social policy, Fidel Castro’s 49-year reign was characterized by a ruthless suppression of freedom of expression,” said Erika Guevara-Rosas, Americas Director at Amnesty International.

“The state of freedom of expression in Cuba, where activists continue to face arrest and harassment for speaking out against the government, is Fidel Castro’s darkest legacy.”

Trump, meanwhile, added that with Castro’s death, his incumbent administration will “do all it can to ensure the Cuban people can finally begin their journey toward prosperity and liberty.”

“While Cuba remains a totalitarian island, it is my hope that today marks a move away from the horrors endured for too long, and toward a future in which the wonderful Cuban people finally live in the freedom they so richly deserve,” Trump said, but he stopped short of saying whether his administration would undo Obama’s normalization process.

History will remember Fidel Castro as an evil, murderous dictator who inflicted misery & suffering on his own people https://t.co/dXZshjRzu3 pic.twitter.com/AJ9c1MV2gu

Former President Jimmy Carter warmly remembered Castro, saying in a statement: “We remember fondly our visits with him in Cuba and his love of his country. We wish the Cuban citizens peace and prosperity in the years ahead.”