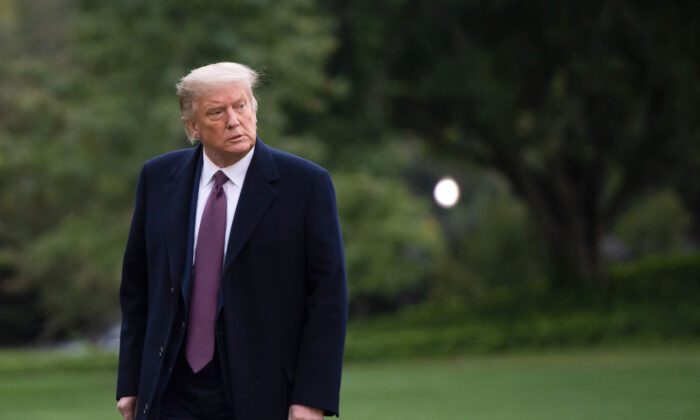 President Donald Trump walks from Marine One after arriving on the South Lawn of the White House in Washington, Oct. 1, 2020. (Saul Loeb/AFP via Getty Images)
Trump Administration

President Donald Trump said on Friday that he supports an even larger COVID-19 relief package than the $2.2 trillion package that Democrats are offering.

“I would like to see a bigger stimulus package, frankly, than either the Democrats or Republicans are offering,” Trump said on Rush Limbaugh’s radio show Friday.

The president said he is now doing “the exact opposite” of what he was pushing earlier this week, coming after he announced he was stopping negotiations with top Democrats on a spending package. He also accused House Speaker Nancy Pelosi (D-Calif.) of failing to negotiate “in good faith.”

With the president’s support, negotiations between Pelosi and White House officials appear to be on track.

Pelosi’s spokesman, Drew Hammill, wrote that she and Treasury Secretary Steven Mnuchin spoke for about 30 minutes.

“Today, the Secretary returned to the table with a proposal that attempted to address some of the concerns Democrats have,” he said in a Twitter statement. “Of special concern, is the absence of an agreement on a strategic plan to crush the virus. For this and other provisions, we are still awaiting language from the Administration as negotiations on the overall funding amount continue.”

On Friday afternoon, Trump economic adviser Larry Kudlow, the head of the National Economic Council, said the president approved a “revised” package ahead while Trump wrote on Twitter to “go big” in negotiations.

“The president has approved a revised package. He would like to do a deal,” Kudlow said Friday on Fox Business, adding that the White House offered a $1.8 trillion deal to counter Democrats’ $2.2 trillion HEROES Act. “It will be relatively broad-based but I can’t go through details.”

On Friday, Wall Street’s main indexes rose, setting up the S&P 500 and the Dow for their second straight weekly gain on hopes of more federal fiscal aid. Recent trading on Wall Street has been dictated by negotiations in Washington on more stimulus as signs of a slowdown in the domestic economic recovery sparked calls for more aid for businesses and households.

However, the optimism from Trump and others was downplayed by Senate Majority Leader Mitch McConnell (R-Ky.).

“I think the murkiness is a result of the proximity to the election, and everybody kind of trying to elbow for political advantage. I’d like to see us rise above that … but I think that’s unlikely in the next three weeks,” McConnell told reporters in Kentucky, referring to the on-and-off-again negotiations that have last since the summer.