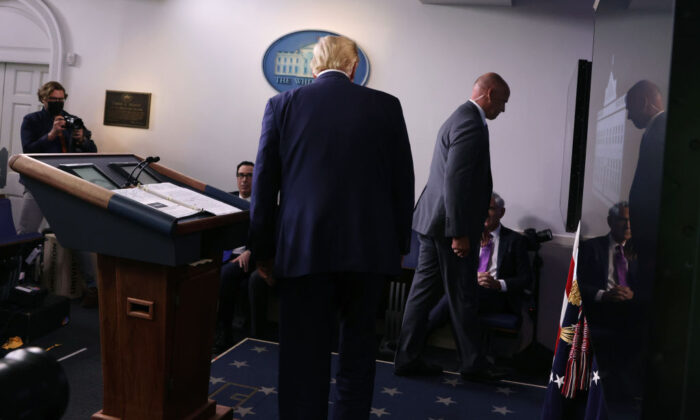 A U.S. Secret Service agent tells President Donald Trump to leave the briefing room after shots were reported fired near the White House in Washington on Aug. 10, 2020. (Alex Wong/Getty Images)
US News

Trump: Not Clear If Shooting Suspect Near White House Had Bad Intentions

President Donald Trump on Monday was abruptly escorted from a daily press conference at the White House, only to return to say that there was a shooting outside the building. He wasn’t sure if the incident was connected to him and wasn’t sure if the person who was shot had ill intentions.

“It might not have had to do with me. It might be something else,” Trump told reporters, referring to the shooting “which took place right outside the White House. The new fencing they put up is very powerful. But it was on the outside of the White House … in a little while, the Secret Service will have a full report.”

He added that he was told the suspect may have been armed.

The U.S. Secret Service wrote on Twitter: “The Secret Service can confirm there has been an officer-involved shooting at 17th Street and Pennsylvania Ave. Law enforcement officials are on the scene. More information to follow.”

In another update around 8:00 p.m., the agency wrote, “Update: the investigation into a USSS officer involved shooting is ongoing. A male subject and a USSS officer were both transported to a local hospital.

“At no time during this incident was the White House complex breached or were any protectees in danger.”

The District of Columbia fire department told The Associated Press that one man suffered serious or possibly critical injuries in the incident. The AP reported that officials are attempting to determine whether the suspect was mentally ill.

The president told journalists that he was taken to the Oval Office near the briefing room.