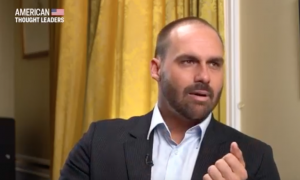 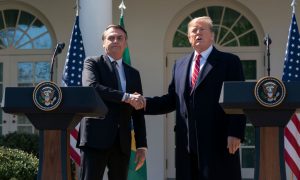 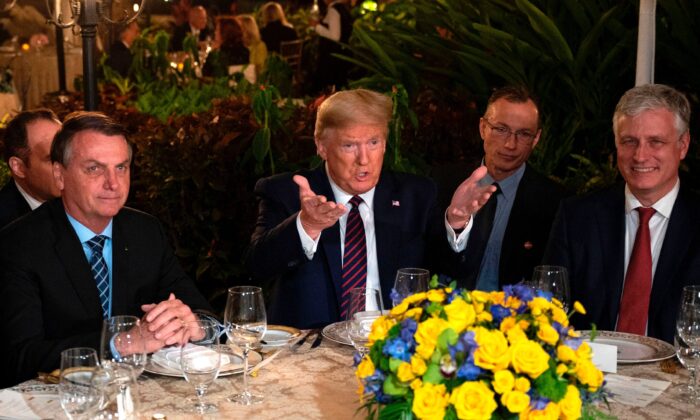 Trump: No Promises on Brazil Steel and Aluminum Tariffs

PALM BEACH, Fla.—President Donald Trump would not commit Saturday to continue holding off on hitting Brazil with tariffs on imports of its aluminum and steel, saying “I don’t make any promises.”

Trump commented in the presence of Brazilian President Jair Bolsonaro, who Trump was hosting for dinner at his resort home in southern Florida.

In a tweet in December, Trump criticized Bolsonaro’s government of hurting American farmers by manipulating its currency. He pledged to slap tariffs on Brazilian aluminum and steel, but withdrew the threat days later.

…..Reserve should likewise act so that countries, of which there are many, no longer take advantage of our strong dollar by further devaluing their currencies. This makes it very hard for our manufactures & farmers to fairly export their goods. Lower Rates & Loosen – Fed!

“We have a very good relationship as to tariffs … we want to always help Brazil,” said Trump, who appeared with Bolsonaro at the front door of his Mar-a-Lago estate.

“The friendship is probably stronger now than it’s never been,” Trump said.

Asked whether his comments meant no new tariffs on Brazil, Trump declined to say.

“I don’t make any promises,” he said, before he led Bolsonaro to a dinner table on the club’s bustling outdoor patio. U.S. National Security Adviser Robert O’Brien, and Trump’s daughter Ivanka and her husband, Jared Kushner, both senior White House advisers, were also at the table along with several Brazilian government officials.

White House officials said the crisis in Venezuela, a possible U.S.-Brazil trade deal, and Chinese telecom giant Huawei were discussion topics for the leaders. A statement the White House released after the meeting did not mention Huawei.

Bolsonaro is on a three-day trip to the United States that includes a visit to the Miami headquarters of U.S. Southern Command, which oversees U.S. military operations in Central and South America, and the Caribbean. Bolsonaro also scheduled meetings with Florida Sens. Marco Rubio and Rick Scott, both Republicans. Trump is in Florida through Monday.

Trump’s administration has been the most important ally for Venezuela’s opposition since Juan Guaidó leaped to the center of Venezuela’s tumultuous political landscape more than a year ago. He pledged to force socialist leader Nicolás Maduro from power and restore democracy.

Guaidó has the backing of more than 60 nations.

The United States is continuing its “maximum pressure” campaign against Maduro and will continue to work on unspecified “bottlenecks” to a trade agreement with Brazil, said a senior Trump administration official who briefed reporters before the leaders met.

The United States has been trying to convince governments worldwide to ban the Chinese tech giant Huawei from having any stake in their 5G networks. But U.S. ally Britain decided to grant Huawei a limited role in supplying new high-speed network equipment to wireless carriers.

House Speaker Nancy Pelosi urged NATO allies to not succumb to the temptation of letting Huawei into their next-generation cellular networks, on Feb. 17 at Allied headquarters, turning U.S. opposition to Huawei into a bipartisan effort.

Bolsonaro, called the “the Trump of the tropics,” has turned his relationship with the U.S. president into a cornerstone of his foreign diplomacy. The conservative Brazilian leader has used Trump to shore up his base, often praising him and posting videos of himself on social media simply watching Trump speeches on television.

Trump says they have a good relationship. He hosted Bolsonaro at the White House last March.

Trump last year granted Brazil the status of privileged ally outside NATO and backed its bid for membership in the Organization for Economic Cooperation and Development.

By Darlene Superville and Diane Jeantet