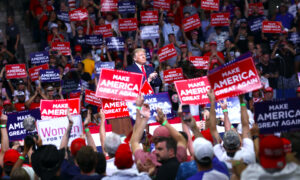 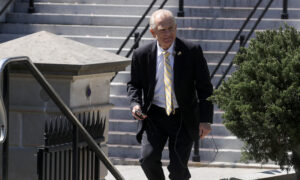 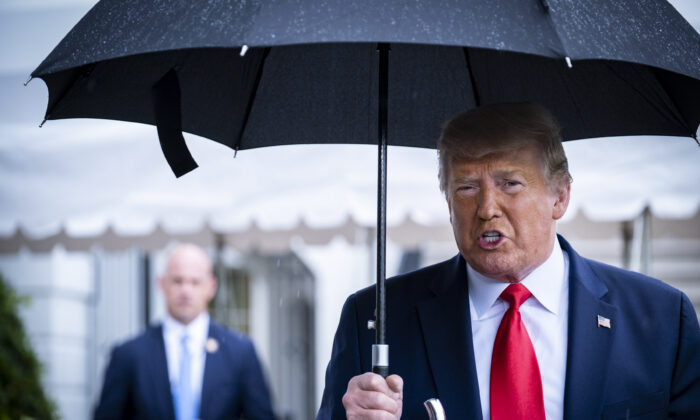 President Donald Trump stops to speak to the media in the rain on the South Lawn of the White House as he prepares to depart aboard Marine One for a rally in Tulsa, Okla., in Washington on June 20, 2020. (Pete Marovich/Getty Images)
Trump Administration

Trump: Niece ‘Not Allowed’ to Write Book Due to Nondisclosure Agreement

Mary Trump, the president’s niece, wrote a book titled: “Too Much and Never Enough: How My Family Created the World’s Most Dangerous Man” and is slated to be published on July 28.

She isn’t allowed to write a book because she signed a nondisclosure agreement, President Donald Trump said in an interview with Axios.

The agreement is “very powerful” and “covers everything,” the president added.

A full transcript of the interview wasn’t released, nor was any audio or video.

White House press secretary Kayleigh McEnany said Friday that neither she nor the president has seen the book.

“So I’m not going to sit here and speculate about what it may say or what it may not say,” she said.

Simon & Schuster, which is publishing Mary Trump’s book, didn’t respond to an inquiry.

According to the book’s description, Mary Trump paints a “revelatory, authoritative portrait” of Trump and “the toxic family that made him.”

Simon & Schuster describes Trump’s niece as a trained clinical psychologist, with a PhD from the Derner Institute of Advanced Psychological Studies. The president’s only niece, she lives with her daughter in New York.

“Mary L. Trump has the education, insight, and intimate familiarity needed to reveal what makes Donald, and the rest of her clan, tick,” the description states.

“She alone can recount this fascinating, unnerving saga, not just because of her insider’s perspective but also because she is the only Trump willing to tell the truth about one of the world’s most powerful and dysfunctional families.”

Simon & Schuster is also publishing a book from Trump’s former national security adviser, John Bolton. That book is due out this week after a judge declined to block its release.

A number of top administration officials, and South Korea, have challenged claims made by Bolton.

“Unilaterally publishing consultations made based on mutual trust violates the basic principles of diplomacy and could severely damage future negotiations,” he added.