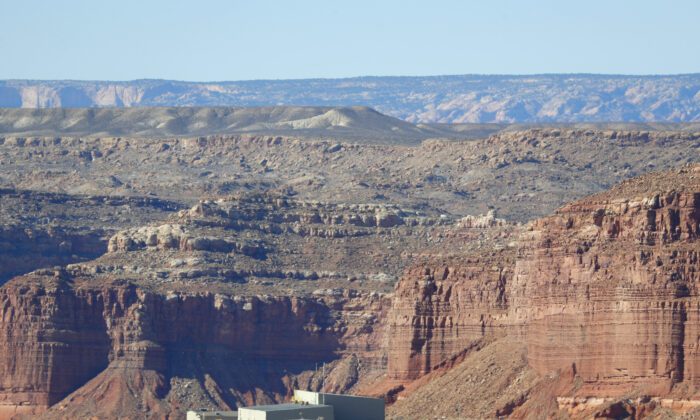 Anfield's Shootaring Canyon Uranium Mill sits in the middle of the Utah desert on Oct. 27, 2017 outside Ticaboo, Utah. Anfield with is in partnership with the Russian firm Uranium One, and bought the mill from Uranium One in 2015. The House of Representatives is getting ready to investigate the Obama-era approval sale of Uranium One to a Russian company. (George Frey/Getty Images)
Viewpoints

One of the biggest scandals of the Obama administration is seriously endangering U.S. national security. The federal government’s approval of the sale of the Uranium One mining company to the Russian state-owned nuclear company leaves our country vulnerable to the Russians. Only President Donald Trump can restore our national security, and the time to do that is now.

Not surprisingly, the Uranium One scandal received little attention in the mainstream media. That was likely due to the involvement of then-Secretary of State Hillary Clinton who would soon become the Democratic nominee for president.

Some in the media have scoffed at the notion of Clinton’s role. The fact remains, however, that the Uranium One sale was subject to approval by a cabinet-level Committee on Foreign Investment in the United States (CFIUS). Neither Clinton nor then-Vice President Joe Biden did anything at the time to stop the transaction of U.S. uranium mines critical to America’s national and energy security to the Russians. Worse yet, after the sale, the Clinton Foundation received a sizable donation from a former Uranium One chairman.

Now, Trump has an opportunity to undo another bad Biden–Clinton deal. While Trump passed on his Commerce Department’s recommendation to implement a “Buy America” quota for U.S. uranium, he did direct an administration working group to report by Oct. 15 with recommendations to revitalize this industry critical to U.S. national and energy security.

The once-vibrant U.S. uranium mining sector is nearly extinct thanks to cheap foreign uranium supplies that have flooded the U.S. market. Whereas the United States once produced all the uranium needed for our civil and defense needs, it is now nearly totally dependent on imports of foreign uranium, which account for 98 percent of the uranium used in U.S. nuclear reactors.

Russia, Kazakhstan, and Uzbekistan account together for a combined 40 percent of all uranium imported into the United States. Yes, Russia—the country Democrats claim to fear so very much over election tampering.

Moreover, The Wall Street Journal reported in 2018 that the Department of Homeland Security and other intelligence agencies disclosed that Russian entities have tried to hack into the U.S. electric grid and into the control rooms of the U.S. utilities, the same customers buying Russia’s uranium.

The U.S. Defense Department is required to use U.S.-origin uranium for its nuclear submarines, aircraft carriers, and other defense purposes. But with so little U.S. uranium being mined today, the Pentagon is now drawing from its dwindling uranium stockpiles.

From the beginning, Trump has been an outspoken critic of the Uranium One deal and its threat to our national security. He also has a much clearer understanding of the threat posed to the U.S. nuclear power sector if it remains dependent on imports to cover 98 percent of the uranium used in its plants.

According to news reports, Trump’s uranium working group is considering several executive actions that will result in long-term uranium purchase contracts with U.S. mining companies at price levels that will sustain U.S. production and thus our national security. But I would urge Trump to also reconsider the “Buy America” quota for U.S. uranium that was recommended by his Commerce Department.

Because of Trump’s policy of “energy dominance,” the U.S. people can be confident that his administration will take the bold and urgent action that is necessary to not only reduce the United States’ dependence on foreign uranium imports but also help put miners in the U.S. uranium industry back to work.

Trump has demonstrated that these are two issues he takes seriously by establishing the new U.S. policy of “energy dominance” and by rebuilding the United States’ military. He surely understands that the United States cannot have energy dominance or strategic supplies of uranium for defense purposes if it is at the mercy of Russian and other foreign imports of uranium, as is the case today.

Under Trump’s policies, the United States is safer and more secure than ever. But there is more to do. With the stroke of his pen, Trump can strengthen the United States’ energy and national security, put U.S. mines back to work, and send a powerful signal to Russia and other foreign actors that the days of cozy deals like the Biden–Clinton Uranium One transaction are over.