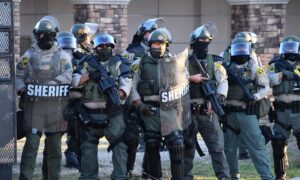 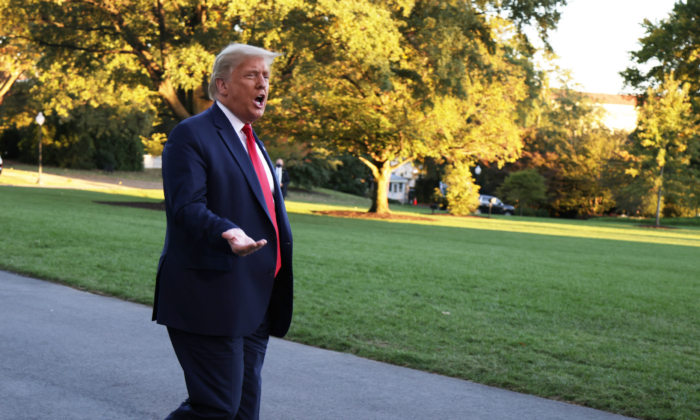 President Donald Trump speaks to members of the press prior to a Marine One departure from the White House on Oct. 13, 2020. (Alex Wong/Getty Images)
Viewpoints

As legend has it, in 333 B.C., Alexander the Great and his all-conquering Macedonian army entered the Phrygian city of Gordium, in what is today Turkey, but was then part of the Persian Empire.

There he was presented with an ancient wagon, yoked by “several knots all so tightly entangled that it was impossible to see how they were fastened.” He was told that the man who could unravel the knot would rule over all Asia.

Thus challenged, Alexander contemplated the mess, then drew his sword and cut the knot in twain. Problem solved.

True or not, the story has inspired leaders and heroes for thousands of year: Instead of accepting the premises and parameters of any given challenge, dispose of it in the simplest way possible.

Faced with a huge Arab swordsman in the film “Raiders of the Lost Ark,” slashing the air with his scimitar, Indiana Jones cut his own Gordian Knot by simply pulling his pistol and shooting his antagonist. However unsportsmanlike, it worked.

Faced with a final assault on his presidency from the “Resistance,” President Donald Trump is now in an analogous position. Our long-running national psychodrama, which began when Democrats simply refused to accept the surprise results of the 2016 election and instead seized upon the “Russian collusion” narrative—a fabrication that now appears was begun by Hillary Clinton with the enthusiastic endorsement of the media and at least the tacit approval of the Intelligence Community and the Obama administration—in order to bring him down.

That, at least, is the sense of recently declassified documents from the director of National Intelligence, John Ratcliffe. There can be little to no doubt that it’s true—not for nothing is the motto of the modern left “by any means necessary,” and if that involves misrepresentations and outright falsehoods, well—as fired FBI Director James Comey entitled his memoirs—they have “a higher loyalty.”

As he recovers from the CCP virus, Trump also must battle not only its aftereffects, but also the entire panoply of his foreign and domestic enemies, now arraigned in battle dress on the field of fight and itching to get it on.

Trump is surrounded on all sides by hostile Democrats, the violent radicals of Black Lives Matter and Antifa, the duplicitous Never Trumpers, wishy-washy mainline Republicans, a still-largely hostile federal judiciary devoted to frustrating his executive orders via nationwide injunctions, and a sluggish and unresponsive cadre of executive-branch officials who slow walk or simply ignore his directives, apparently on the theory that if they wait long enough, Trump will eventually just go away.

And then the swamp creatures can go back to their daily routines of living off the carrion of the American body politic, undisturbed and as gluttonous as ever.

What Trump must do now, in the time left before Nov. 3, is to cut the Gordian Knot on as many fronts as possible—and be seen doing it. How? By scheduling an address from the Oval Office as soon as possible and confronting the following topics:

Russiagate. Rumors are wafting around the Justice Department that special counsel John Durham’s investigation of the “collusion” scandal and its targeting of both the Trump campaign and the earliest days of the administration won’t be complete until after the election.

This is simply unacceptable. If the Democrats and their media buddies deliberately set out to torpedo the campaign and emasculate the new administration during the last election, the time for the electorate to know that is before the next election, not after.

The response is that Durham and his boss, Attorney General William Barr, “want to win prosecutions.” So what? Politics ain’t beanbag, and something as consequential as a presidential election campaign doesn’t have time to wait for insecure lawyers to dot every “i” and cross every “t.”

The president says he’s declassified all the relevant documents, so it’s time for him to lay out the whole sordid plot. Sure, the Democrats will scream bloody murder, but what’s the point of having the bully pulpit if you can’t use it?

As the late Justice Ruth Bader Ginsburg observed, the president doesn’t stop being president during his last year of office, even with his rival putatively “ahead” in the polls. Trump has been tweeting his frustration and fury at the plot against him for four years; now’s the time for him to do something about it.

The coronavirus. Enough with the lockdowns, already. Enough with muzzling the public. Enough with the tyranny of mostly Democratic politicians who have arbitrarily set unconstitutional limits on churches, synagogues, and private businesses in clear violation of the First Amendment under the rubric of a public health “emergency” little deadlier than the flu.

Trump has already set a good personal example by bouncing back quickly from his own bout with the bug. Now he needs to explain that statecraft involves hard choices and tradeoffs, and the country’s overall health can no longer be held hostage by COVID-19 while the media frets about the rise in “cases” while ignoring the plummeting death rates.

The truth is, the economic destruction plays right into the Democrats’ hands, continuing to hamstring the once-robust economy just in time for the vote. The president can’t command the states to do much of anything, of course—but he can surely exhort them to do the right thing. No more than lawyers, doctors shouldn’t be setting public policy. That’s a job for elected officials and no one else. Advise, yes; dictate, no.

Civil unrest. Every American can see with his own eyes that the Democrats have already taken to the streets, beating, punching, pummeling, and in some cases even killing their political opponents. Statues have been toppling for months, and buildings razed by fire. The corrupt media calls these “mostly peaceful” protests, and fan-dances them behind a First Amendment whose guarantees of freedom they otherwise ignore.

The assault on our police departments, along with the calls to defund them and thus, in effect, to decriminalize violent crime, is yet another baleful effect of this year’s extraordinary confluence of events, disease, and politics.

State national guards and militias could end this insurrection in a few days, but it’s to the advantage of the Democrats to prolong the destruction—and fear. They need to be put on warning by the president that further wanton destruction will no longer be tolerated—before, during, or after the election.

This triad of troubles—lawfare, lockdowns, and looting—is the tangled rope of the Democrats’ last-ditch electoral strategy, which is to continue to create enough chaos in the hopes that a weary public will say “no mas”—and vote for the husk of a Democratic presidential nominee, Joe Biden, and the stealth-presidential candidacy of Sen. Kamala Harris just to make it stop.

But with one well-crafted speech about the danger of the “collusion” hoax, the overreaction to the coronavirus, and the violence now haunting many American cities, the president can bring all the threads together—and then, like Alexander, sever them with one bold, clarifying stroke.