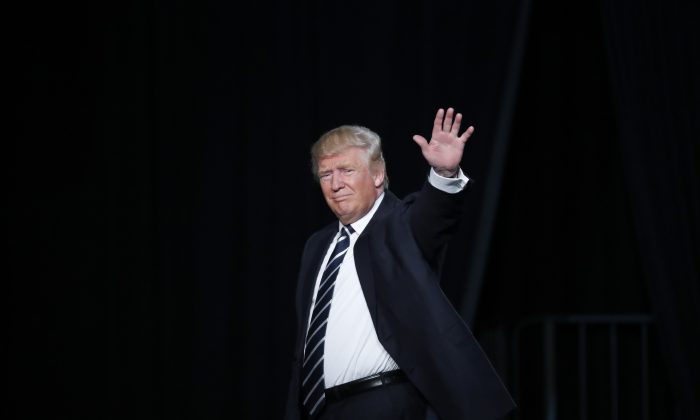 President-elect Donald Trump made his first two key personnel appointments on Sunday, one an overture to Republican circles by naming GOP chief Reince Priebus as his White House chief of staff, the other a shot across the bow of the Washington establishment by tabbing Breitbart news executive Stephan Bannon as chief strategist and senior counselor.

The two men had made up the president-elect’s chief of staff shortlist, and while Priebus received that job, Bannon’s post also is expected to wield significant clout. The media executive with ties to the alt-right and white nationalist movement was given top billing in the press release announcing their appointments.

Trump’s hires were, at first glance, contradictory, though they fit a pattern of the celebrity businessman creating a veritable Rorschach test that allowed his supporters to see what they wanted. Priebus, who lashed the RNC to Trump this summer despite some intraparty objections, is a GOP operative with deep expertise of the Washington establishment that Trump has vowed to shake up. He has close ties to House Speaker Paul Ryan, a fellow Wisconsinite.

Bannon, meanwhile, helped transform the Breitbart news site into the leading mouthpiece of the party’s anti-establishment wing, which helped fuel the businessman’s political rise. Ryan has been one of his most frequent targets.

“Steve and Reince are highly qualified leaders who worked well together on our campaign and led us to a historic victory,” Trump said. “Now I will have them both with me in the White House as we work to make America great again.”

Neither Priebus nor Bannon bring policy experience to their new White House roles. Chiefs of staff in particular play a significant role in policy making, serving as a liaison to Cabinet agencies and deciding what information makes it to the president’s desk. They’re often one of the last people in the room with the president as major decisions are made.

In announcing the appointments, Trump said Priebus and Bannon would work as “equal partners”—effectively creating two power centers in the West Wing. The arrangement is risky and could leave ambiguity over who makes final decisions.

Trump has long encouraged rivalries, both in business and in his presidential campaign. He cycled through three campaign managers during his White House run, creating a web of competing alliances among staffers.

Priebus is a traditional choice, one meant as an olive branch to the Republicans who control both houses of Congress as Trump looks to pass his legislative agenda.

Ryan tweeted, “I’m very proud and excited for my friend @Reince. Congrats!” Ryan made no mention of Bannon in that tweet, but earlier told CNN that he didn’t know Bannon but “I trust Donald’s judgment.”

The Bannon pick, however, is anything but safe.

Under Bannon’s tenure, Brietbart pushed a nationalist agenda and became a popular outlet of the so-called alt-right—a movement some media outlets are associating with “white supremacist” ideas that oppose multiculturalism and defend “Western values.”

The appointments came after a day in which Trump’s tough-talking plan to rein in illegal immigration showed signs Sunday of cracking, with the president-elect seemingly backing off his vow to build a solid wall along the southern U.S. border and Ryan rejecting any “deportation force” targeting people in the country illegally.

Though Trump told CBS’ “60 Minutes” in an interview airing Sunday night that his border wall might look more like a fence in spots, one thing didn’t change from his primary: the combative billionaire took to Twitter to settle some scores.

During a four-hour spree, Trump savaged The New York Times for being “dishonest” and “highly inaccurate” and gloated about the GOP stalwarts lining up to congratulate him, bragging that staunch critics and GOP rivals Kasich, Mitt Romney and Jeb Bush had sent attaboys.

As Trump revenge-tweeted, threats flew between power brokers, and protests across the country continued.

Early in the GOP primaries, Trump had vowed to immediately deport all 11 million people living in the country illegally. But he distanced himself from that position as time went on, eventually saying that he would focus on people living in the country illegally who had committed crimes beyond their immigration offenses. He emphasized in the “60 Minutes” interview that securing the border is his very first immigration priority.