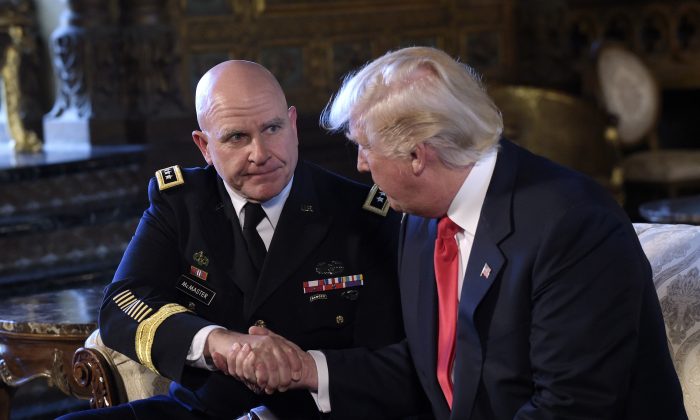 McMaster, a decorated war hero, has served as the director of the Army Capabilities Integration Center, an institution dubbed a “think-tank for the Army.”

He was described as “smart, energetic, and tough” by journalist and acquaintance of McMaster, Thomas Ricks.

On multiple occasions, McMaster has criticized U.S. military leadership, but it didn’t stop his career. His 1997 book “Dereliction of Duty,” a criticism of American military leadership in Vietnam, is on the official reading list for senior Marine Corps officers.

His first deployment, in the Gulf War (Aug. 2, 1990–Feb. 28, 1991), showed him the power of superior technology. During the Battle of 73 Easting, the nine state-of-the-art Abram tanks and 12 armored vehicles under his command destroyed 83 enemy vehicles, including 28 tanks, during a single encounter.

Yet two decades later, in 2013, he said it was the fascination with technology that derailed military campaigns in Iraq and Afghanistan. The command mistakenly sought “fast, cheap victory through technology,” he argued, and failed to strategize for the political aim of the wars (fostering reliable governments), and failed to understand the human aspect of wars, “the fears, interests, and sense of honor among Afghanistan’s and Iraq’s citizens.”

The military has learned from its mistakes, he said. “Every time you disrespect an Iraqi, you’re working for the enemy,” he once told his soldiers, according to Ricks.

McMaster’s predecessor, retired General Michael Flynn, was asked by Trump to resign last week after it was revealed he gave Vice President Mike Pence “incomplete information” about a call he’d made to Russian Ambassador Sergey Kislyak. The gaffe led Pence to repeatedly give the media false information about the content of the call.

However, with regard to the offer, there’s a significant difference between McMaster and Harward, Ricks wrote: “[H]is wife won’t kill him if he takes the job, as Harward’s wife might have.”