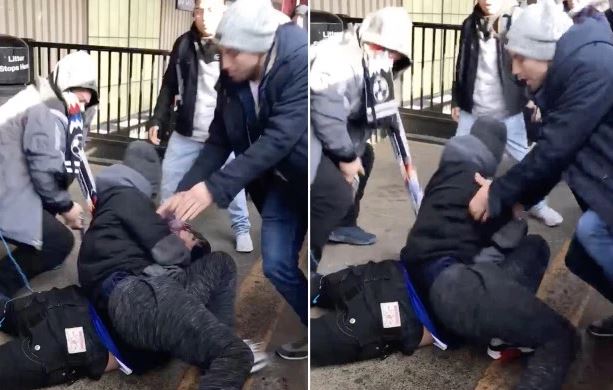 Three men wrestled on a New York City subway platform before one whipped out a gun and shot another on Feb. 3, 2019. The shooting suspect is reportedly a member of the notorious MS-13 gang. (Bidur Bista/Facebook)
Crime and Incidents

President Donald Trump referred to a brutal murder that took place recently in New York City during his Feb. 5 State of the Union speech.

The murder happened in broad daylight on a subway platform as shocked residents stood and watched a suspected MS-13 gang member pull out a gun and shoot another man.

The victim was reportedly a member of the 18th Street Gang, a rival to MS-13.

Police arrested the suspected gunman, 26-year-old Ramiro Gutierrez, known to police as an MS-13 gang member, on Feb. 4, a day after the brutal murder.

Gutierrez was charged with second-degree murder, first-degree gang assault, and two counts of criminal possession of a weapon.

On Tuesday night, Trump referenced the murder and said that his administration is trying to deal with MS-13, a gang known for its obscene methods of killing.

“We are removing these gang members by the thousands but until we secure our border they’re going to keep streaming back in. Year after year, Americans are murdered by criminal illegal aliens,” Trump said.

Referring to families of those killed by MS-13 members and illegal immigrants, he added, “No one should ever have to suffer the horrible heartache that they have had to endure.”

Three of Trump’s guests at the speech have suffered firsthand from the violence committed by illegal immigrants.

Debra Bissell, her daughter Heather, and her great-granddaughter Madison were invited to the speech by Trump and his wife.

“Just three weeks ago, Debra’s parents were burglarized and shot to death in their Reno, Nevada, home by an illegal alien,” Trump said.

“The terrible loss has devastated both their community and three generations of their family who will be represented at the State of the Union,” the White House said in a statement.

Trump said that the numerous crimes committed by illegal aliens in the United States highlight the need for a southern border wall.

“Not one more American life should be lost because this nation should fail to secure its very dangerous border,” he said.

Pres. Trump introduces Debra Bissell: “Just three weeks ago, Debra’s parents…were burglarized and shot to death in their Reno, Nevada, home by an illegal alien. They were in their 80s, and they’re survived by four children, 11 grandchildren, & 20 great-grandchildren.” pic.twitter.com/QfjwNBmmqo

“There was a shooting just yesterday by what looks to be MS-13 gang members in the New York subway,” she said. “These things should not be happening if we can prevent that, and we know that the crime and the drugs and those things drastically stop if you have real border security, and that includes a wall.”

Two other suspects are being sought by the police. Shea, the police chief of detectives, said officials have seen a number of gang-related crimes in Queens recently.