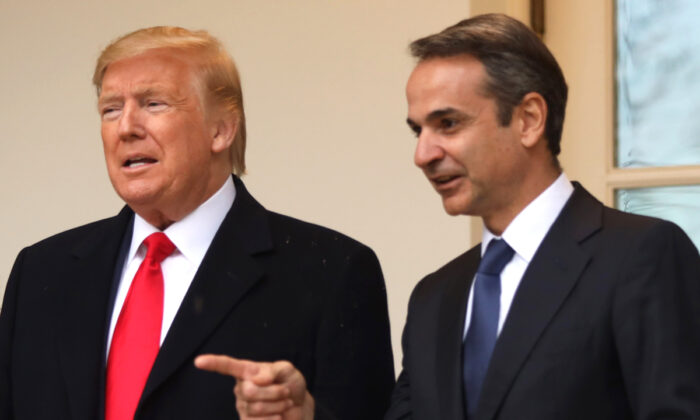 During a press conference held before the bilateral meeting with Trump, Mitsotakis stressed the importance of strengthening the strategic relationship between the two countries, as Greece is “a reliable and predictable ally [of the United States] in a complicated part of the world.”

He also emphasized the recovery of the Greek economy and the economic growth that the country has achieved. The growth can be attributed to Greek government policies that have proven successful in the United States, such as lowering taxes and deregulation, said Mitsotakis. He also invited American companies to invest more in Greece and contribute to the economic growth of the country.

Greece suffered a debt crisis between 2008 and 2018 but received bailout loans from the European Union and the International Monetary Fund. In 2018 the rescue program ended but until all loans are repaid the country’s budget is under strict austerity measures and is overseen by its creditors.

Mitsotakis expressed Greece’s interest in participating in the F-35 program. The F-35 is a multinational program led and mainly funded by the United States to develop and produce a family of cutting edge combat aircraft.

Greece recently signed a contract with Lockheed Martin for a major upgrade of its F-16 fighter aircraft and, according to Mitsotakis, after the completion of the upgrade in 2024 Greece would like to participate in the F-35 program. As a NATO member Greece is currently spending more than 2 percent of its GDP on defense—a standard adopted by all NATO members in 2014.

Mitsotakis pointed out that “that the agreement signed between Turkey and Libya [that divides the Mediterranean Sea between Turkey and Libya claiming water off Greek islands] infringes upon Greece’s sovereign rights and essentially causes great concern and instability in the region.” He is seeking support from the United States to ensure that “these types of provocative agreements are not being put into place.”

Mitsotakis also talked about increasing the Greece’s and Europe’s energy security and the plans to diversify natural gas sources. Greece will expand its technical capabilities to import liquefied natural gas from the United States and other countries and will also become a natural gas distributor to the European market, said Mitsotakis at the Atlantic Council.

In addition Greece entered into a deal with Israel and Cyprus to build the 1,300-mile EastMed pipeline under the sea to transport natural gas produced from the newly discovered reserves in the eastern Mediterranean.

Mitsotakis said that the does not exclude other countries, however.

“We don’t seek to exclude anyone from energy cooperation in the eastern Mediterranean provided they respect international law and play by the rules of the game,” he said.

In December 2019 the U.S. Congress adopted the Eastern Mediterranean Security and Energy Partnership Act introduced by Sen. Robert Menendez (D-N.J.), which reshapes the U.S. policy toward the eastern Mediterranean region and strengthens the U.S. alliance with Greece, Israel, and Cyprus, according to a joint statement issued by Menendez and Sen. Marco Rubio (R-Fla.) who cosponsored the bill.

The bill authorizes military aid to Greece, the establishment of a U.S-Eastern Mediterranean Energy Center to facilitate energy cooperation among the United States, Israel, Greece, and Cyprus and lifts the U.S. arms embargo on Cyprus, said Menendez and Rubio in the statement.

Mitsotakis also stated that Greece’s core network “regarding 4G and 5G does not have any Chinese suppliers” and Greece “will take into consideration” the concerns on 5G security expressed by the United States.