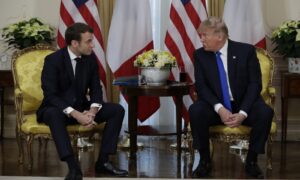 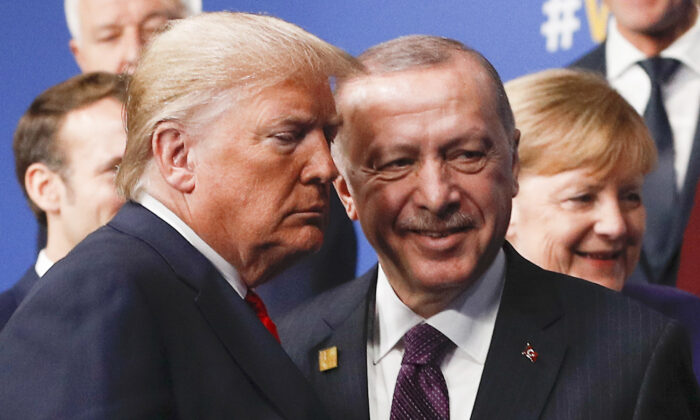 President Donald Trump, left, and Turkey's President Recep Tayyip Erdogan leave the stage after the family photo to head to the plenary session at the NATO summit at the Grove hotel in Watford, northeast of London, on Dec. 4, 2019. (Peter Nicholls/POOL/AFP via Getty Images)
International

President Donald Trump said the cease-fire between Turkey and Syria is “holding” and praised Turkey for protecting the Baltic states and Poland after meeting with Turkish President Recep Tayyip Erdogan on Dec. 4 in London amid meetings with leaders of countries that are part NATO.

Trump said he and Erdogan “discussed everything” in their unscheduled meeting.

“It was a very good meeting, I think. We discussed Syria. We discussed the Kurds. We discussed numerous things, and we’re getting along very well. The border and the safe zone is working out very well. And I gave a lot of credit to Turkey for that. The cease-fire is holding very much so and I think people are surprised,” he told reporters.

“Maybe someday they’ll give me credit, but probably not. They’ve been trying to work this out for 100 years. That border [has been] a mess for a long time. We pulled our soldiers out and took over the oil. We have soldiers where the oil is. And that’s the way I like it. And they can police their own border. And that’s what they’re doing. They can use other countries if they want, if they want to spend the time and energy. But this has been a border under siege for many, many decades, and it was time for us to leave, and we left, and it’s been holding very nicely. So we’re very happy. We talked about that.”

“They’ve been very good. I think that, frankly, a lot of people paid great respect to Turkey for the work they’ve done, and we had a number of mentions where they were mentioned specifically,” he said.

The meeting came after some other NATO leaders declined to meet with Erdogan, who has been under criticism since attacking Syria in October.

The Turkish government published pictures of Trump and Erdogan meeting on the sidelines of the NATO summit. Turkish presidency communication director Fahrettin Altun said in a statement that the meeting was “very productive.”