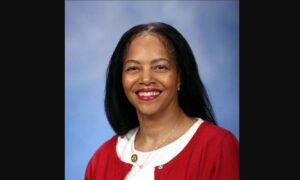 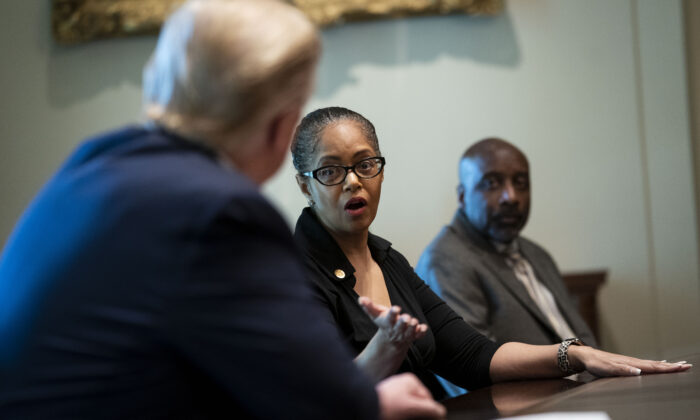 State Rep. Karen Whitsett of Michigan, talks about her bout with the CCP virus at a meeting hosted by President Donald Trump with recovered COVID-19 patients in the Cabinet Room at the White House on April 14, 2020. (Doug Mills-Pool/Getty Images)
Trump Presidency

Trump Meets With Americans Who Recovered From CCP Virus

President Donald Trump hosted some Americans who have recovered from the CCP virus on April 14 at the White House, including a state lawmaker who credited the president for her recovery.

Democratic Michigan state Rep. Karen Whitsett, who was among the former patients who met with Trump, said that earlier this month she took hydroxychloroquine after testing positive for COVID-19, and almost immediately began experiencing relief from symptoms that included swollen lymph nodes and shortness of breath.

Whitsett credited Trump because he has repeatedly touted the anti-malaria drug during CCP virus press briefings.

While the CCP (Chinese Communist Party) virus, commonly known as novel coronavirus, kills a small percentage of patients and can cause serious symptoms in older adults and those with underlying health conditions, most people who become infected only have mild illness and should recover at home.

Speaking to the president, reporters, administration officials, and others at the White House, Whitsett said her condition “went from zero to 100” after being “afraid for [her] life.”

“So you thought you were going to die?” Trump asked.

“I thought I was going to die,” she said.

The president later told Whitsett he would connect her with the White House physician to discuss her preexisting Lyme disease, a tick-borne illness.

Mark Campbell, a Michigan resident who used to play football professionally, said he had a high fever and was receiving care at the hospital before he was prescribed hydroxychloroquine.

“I just said the malaria drug,” Campbell said he told doctors, and they prescribed the drug.

Trump suggested people should take the drug, which is approved for emergency use for COVID-19 patients and traditionally used to combat malaria, lupus, and other ailments.

“What have you got to lose? I actually haven’t heard a bad story,” he said. “The word is out the people get it.”

He then pointed to reporters and said, “These people don’t get it.”

Carl Goldman, who was on the Diamond Princess cruise ship, told those assembled about the experience he went through on the ship.

“It was like we were on a floating petri dish,” he said.

The Carnival Corp.-owned ship docked in Yokohama, Japan, in February and was placed under quarantine after officials learned of a passenger who had disembarked in Hong Kong and tested positive for the CCP virus.

Goldman’s wife, Jeri, was with him on the voyage.

Rachel Mangan of Hot Springs, Arkansas, told the president that it took her over a month to recover from the CCP virus. When Trump asked if she now feels 100 percent better, she pegged her current condition as 85 percent of what it was before.

Another recovered patient, Darshin Patel of California, said he had a tough time with the disease.

“I never felt this bad before,” Patel said.

Vice President Mike Pence thanked the survivors for sharing their stories, telling them, “It truly gives hope to families.”