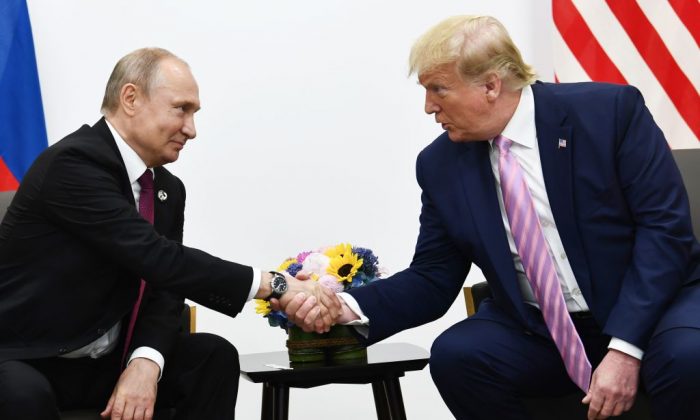 US President Donald Trump (R) attends a meeting with Russia's President Vladimir Putin during the G20 summit in Osaka on June 28, 2019. (BRENDAN SMIALOWSKI/AFP/Getty Images)
US News

Trump Meets Putin at the G-20 Summit in Japan

OSAKA, Japan—President Donald Trump met on June 28 with Russian President Vladimir Putin on the margins of the G-20 summit in Osaka. The bilateral meeting marks the first official encounter between the two leaders in almost a year.

“It is a great honor to be with President Putin,” Trump said as the pair met, adding that they had many issues to discuss, including trade, disarmament, and “a little protectionism perhaps, in a very positive way.”

Trump also said that both leaders “have a very, very good relationship and we look forward to spending some very good time together. A lot of very positive things are going to come out of the relationship.”

Trump and Putin have not come together since their Helsinki summit in July 2018.

When asked whether he would discuss with the Russian leader not to meddle in the U.S. election, Trump said, “Yes, of course, I will.”

At the last G-20 summit in Buenos Aires, Trump refused to meet with Putin because of a fresh incident in which Moscow held captive Ukrainian ships and 23 sailors near Crimea. The sailors are still detained and there has been no sign of progress.

When asked whether both leaders have discussed this issue, Trump said, “We haven’t discussed them.”

According to the White House, the two leaders agreed to “continue discussion on a 21st century model of arms control, which President Trump stated as needing to include China. The leaders also discussed the situations in Iran, Syria, Venezuela, and Ukraine.”

Russia ended the Cold War-era Intermediate-Range Nuclear Forces Treaty (INF) in March. Putin’s action came after the Trump administration accused Moscow of violating the Reagan-era accord and announced it would abandon the deal. The United States will formally withdraw from the agreement by August.

In an interview with the Financial Times on June 28, Putin alarmed about the threat of a renewed nuclear arms race between the United States and Russia.

“The cold war was a bad thing … but there were at least some rules that all participants in international communication more or less adhered to or tried to follow. Now, it seems that there are no rules at all,” he said.