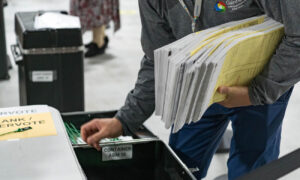 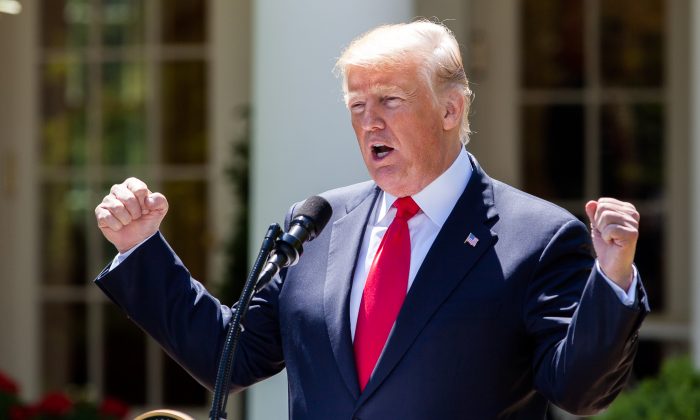 President Donald Trump hosts a joint press conference with President Muhammadu Buhari (not pictured) of the Federal Republic of Nigeria in the Rose Garden of the White House in Washington on April 30, 2018. (Charlotte Cuthbertson/The Epoch Times)
US News

Three Americans who were imprisoned in North Korea have been released and are on a flight back to the United States with Secretary of State Mike Pompeo, President Donald Trump revealed in a Twitter message on Wednesday morning, May 9.

“I am pleased to inform you that Secretary of State Mike Pompeo is in the air and on his way back from North Korea with the 3 wonderful gentlemen that everyone is looking so forward to meeting,” Trump wrote. “They seem to be in good health. Also, good meeting with Kim Jong Un. Date & Place set.”

The group is scheduled to arrive at Andrews Air Force Base in Maryland at 2 a.m. on Thursday. Trump said he will be there to greet everyone.

“Very exciting!” the president wrote in a follow-up Twitter message.

The release and return of the detainees is another major concession by Kim Jong Un ahead of the upcoming meeting with Trump. Kim has already agreed to complete denuclearization and peace with South Korea at a summit between the two countries in April.

Kim Sang-duk, also known as Tony Kim, taught accounting at Pyongyang University of Science and Technology (PUST). He was arrested as he tried to board a plane to leave the country on April 23 last year, the New York Times reported citing the chancellor of the university, Chan-Mo Park.

“The cause of his arrest is not known, but some officials at PUST told me his arrest was not related to his work at PUST,” Mr. Park said. “He had been involved with some other activities outside PUST, such as helping an orphanage.”

Kim Sang-duk studied accounting at the University of California–Riverside, and at Aurora University. He went on to work as an accountant in the United States for more than a decade.

Kim Hak-song also worked at PUST. It’s unclear if his arrest is connected to that of Tony Kim’s two weeks earlier. According to a statement from the university, Kim Hak-song was conducting agricultural development work at a research farm.

Kim Hak-song was born in China and emigrated to the United States in the 1990s. After becoming a U.S. citizen, he moved first to China and then Pyongyang.

Kim Dong-chul was sentenced to 10 years of hard labor in April 2016. Months before his trial, he appeared in a government news conference to apologize for trying to steal military secrets.

In an interview granted by North Korea to CNN, Kim Dong-chul said he was a naturalized U.S. citizen and lived in Fairfax, Virginia. He told CNN that he was arrested in October 2015 during a meeting with a North Korean soldier to receive classified data.

Otto Warmbier, another U.S. citizen, was held in North Korea before his release last year. Warmbier died mysteriously shortly after he arrived in the United States.