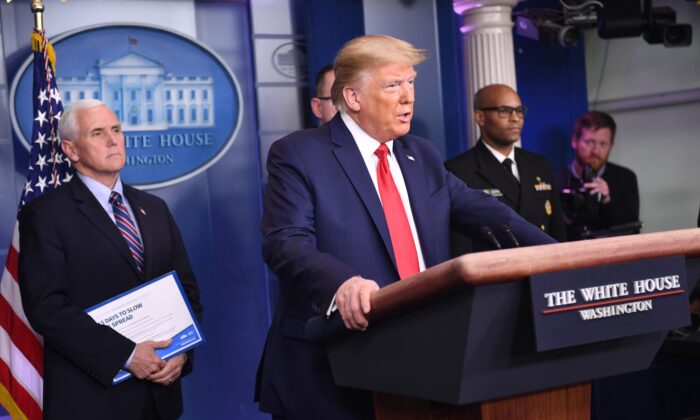 President Donald Trump speaks during the daily briefing on the CCP virus, commonly known as the novel coronavirus, at the White House in Washington, on March 22, 2020. (Eric Baradat/AFP via Getty Images)
AMERICA

President Donald Trump on Sunday approved a major disaster declaration for Washington state and New York, while California is expected to be approved shortly to combat the viral pandemic.

The governors of the three states made requests to the federal government for the order as CCP virus cases multiply across the United States. New York, Washington, and California have the most confirmed patients.

“Were enduring a great national trial” Trump remarked. adding that “we’re at war” with an “invisible enemy.”

“I want you to know as one people, eternally linked by our shared national spirit,” Trump said. “No American is alone.”

A disaster declaration provides a wide range of federal assistance programs and funds for public infrastructure and individual assistance.

Trump, in a news conference, said that “large quantities” of medical equipment and supplies are heading to the hardest-hit states.

California Gov. Gavin Newsom sent the White House an application for a disaster declaration that will be approved “very quickly” and “maybe” on Sunday night, Trump said.

New York Governor Andrew Cuomo had urged the federal government to take over the acquisition of medical supplies so states do not have to compete with each other for resources. He also requested temporary hospitals.

It comes as one in three Americans was ordered to stay home on Sunday to slow the spread of the coronavirus pandemic as Ohio, Louisiana, and Delaware became the latest states to enact broad lockdowns.