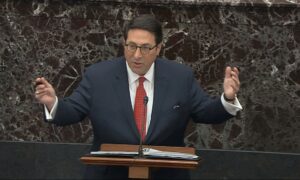 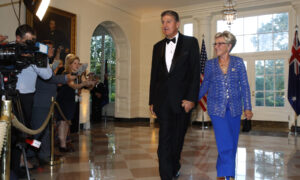 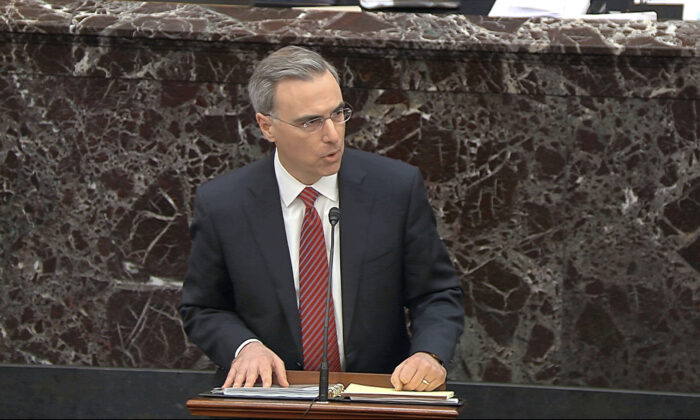 White House counsel Pat Cipollone speaks in favor of of Senate Resolution 483, the organizing resolution for the impeachment trial against President Donald Trump in the Senate at the U.S. Capitol in Washington on Jan. 21, 2020. (Senate Television via AP)
Impeachment Trial

President Donald Trump’s defense team was set to resume arguments arguing against his removal from office on Jan. 27, after opening the arguments on Saturday.

Jay Sekulow, Trump’s personal lawyer; Pat Cipollone, the White House counsel; and other attorneys started laying out their case over the weekend, ending after a few hours.

The trial will resume at 1 p.m. EST with arguments expected from Harvard law professor emeritus Alan Dershowitz, who will make arguments against impeaching Trump based on constitutional law; former Independent Counsel Ken Starr, who probed the last president to be impeached by the House, Bill Clinton; and Pam Bondi, the former Florida attorney general.

“They completely failed to meet that high constitutional standard, and therefore it would be unconstitutional to remove a president based on the allegations that were made against him in the articles of impeachment,” he added.

Even if the factual allegations are true, the House “did not allege impeachable offenses,” he said.

Dershowitz said Trump’s defense team would show that allegations by Democrats—that Trump used the power of his office to try to pressure Ukraine into probing corruption allegations surrounding Hunter Biden and Joe Biden, a leading 2020 Democratic presidential contender—were not true.

Trump’s team said during the Saturday presentation that voters should be allowed to decide whether Trump stays in office and accused Democrats of attempting to interfere in November’s election.

And Sekulow drew attention to U.S. officials who expressed concern about possible corruption in Ukraine, attempting to bolster the case for the legitimacy of Trump pausing congressionally approved military aid to the country.

The arguments by Trump lawyers followed three days of arguments by House Democrats as they tried to convince a supermajority of the Republican-held Senate to vote to convict Trump, or remove the president from office. A simple majority is enough to acquit the president, which is widely expected to happen.

After Trump’s team is done, both sides will answer written questions submitted by senators. A vote on witnesses will take place. Democrats have been pushing to subpoena former National Security Adviser John Bolton and three others they argue have facts relevant to the impeachment efforts. They reiterated their calls after a report on Sunday quoted Bolton’s upcoming book.

Appearing on NBC’s “Meet the Press” Sunday, lead House impeachment manager Adam Schiff (D-Calif.) said his reaction to the opening arguments by Trump’s team was that “they’re deathly afraid of what witnesses will have to say.”

“And so their whole strategy has been deprive the public of a fair trial. They don’t frame it that way, but that’s in essence it. They have a very heavy burden though with that because the American people understand what a fair trial is. A fair trial requires witnesses. A fair trial does not consist of the person who is charged agreeing with the judges to deprive the prosecution from being able to make a case,” Schiff said.

“So it’s hard to argue, ‘We don’t want to hear the evidence,’ particularly when they say, ‘We should hear from more direct witnesses who talked to the president, but we’re not going to allow them to be called.'”

Since the GOP holds a 53-47 majority, at least four Republicans would need to side with Democrats—if every Democrat votes for witnesses—in order for any witnesses to be called. Some GOP members have floated different possible witnesses from those Democrats want to call, including Hunter Biden and Joe Biden.