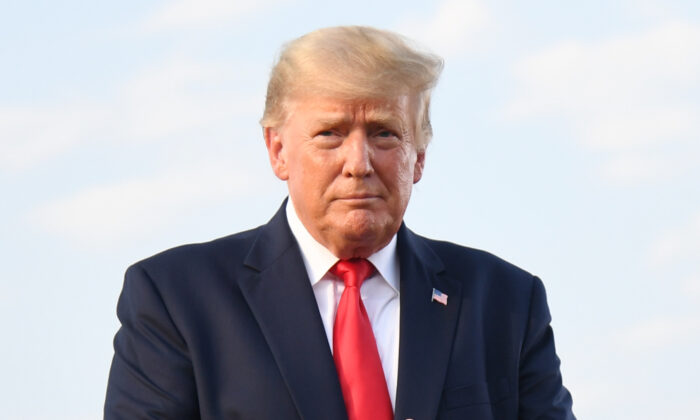 Former President Donald Trump arrives to give remarks during a Save America Rally at the Adams County Fairgrounds in Mendon, Ill., on June 25, 2022. (Michael B. Thomas/Getty Images)
FBI Raids Trump Resort

The redacted search warrant affidavit made public on Aug. 26 shows why an independent party needs to be appointed, lawyers for former President Donald Trump said.

“The Redacted Affidavit underscores why this Motion should be granted, as it provides almost no information that would allow Movant to understand why the raid took place, or what was taken from his home,” lawyers said in a filing to U.S. District Judge Aileen Cannon, a Trump appointee who is deciding whether to grant Trump’s request for a special master.

Typically a retired judge, a special master reviews materials seized by the government and sifts out privileged documents before government officials can look at them.

The affidavit, authored by an FBI agent, convinced a different judge, U.S. Magistrate Judge Bruce Reinhart, to approve a warrant for FBI agents to raid Trump’s Mar-a-Lago resort in Palm Beach, Florida. The warrant was executed on Aug. 8.

A heavily redacted copy of the affidavit was released on Friday, on orders from Reinhart.

They pointed to paragraph three, which stated that there was probable cause to believe that presidential records that fall under the Presidential Records Act remained at Mar-a-Lago after 15 boxes of documents were transferred to federal custody in January.

“This provides the deeply troubling prospect that President Trump’s home was raided under a pretense of a suspicion that Presidential records were on his property – even though the Presidential Records Act is not a criminally-enforceable statute,” Trump’s lawyers said.

Lawyers for the former president recently asked the court to appoint a special master. They noted that a special master has been approved in other recent cases, including after agents seized materials from former Trump lawyer Michael Cohen.

In that case, a different federal court said it was making the move “to ensure the perception of fairness.”

Cannon, assigned to the case by the court, requested the lawyers file a supplemental filing addressing the issues at hand, including whether she has jurisdiction to appoint a special master.

While Reinhart has offered to consider the special master request, magistrate judges—picked by other judges—cannot grant injunctive relief, the filing says, citing a lack of prior precedent.

The lawyers said Cannon should consider the likelihood of irreparable injury and whether the government has shown a “callous regard” for Trump’s constitutional rights, noting that the inventory lists that agents gave Trump lawyers were missing items seized by the FBI, including three of Trump’s passports.

“In sum, the law clearly permits Movant to seek the appointment of a Special Master and to seek the other forms of relief identified in the Motion—namely, an injunction on further Government review of the seized materials, a detailed receipt for property, and the return of improperly seized materials,” the filing states. “Given the law’s ambiguity as to whether magistrate judges can grant the relief requested in the Motion, principles of fairness support this Court’s exercise of jurisdiction concerning the Motion as a whole.”