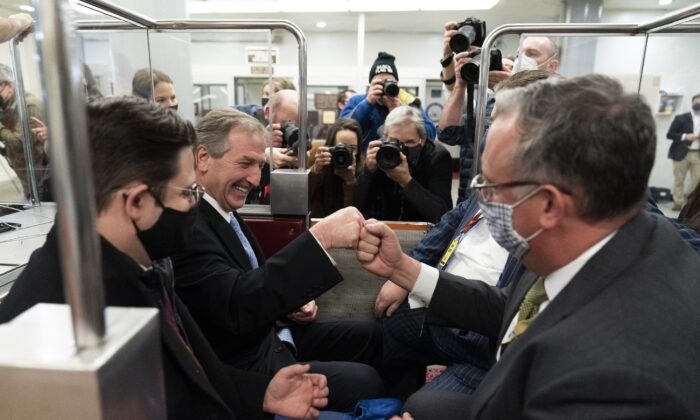 “We slammed it down on the mat and won this case. There’s no grappling anymore. We won. Not guilty,” Michael van der Veen, a Philadelphia lawyer who is part of the legal team, told reporters on Capitol Hill.

“This was a difficult period of time for our country and myself, Mr. van der Veen, and the other members of the team are extraordinarily gratified that the United States Senate decided as they did to protect our Constitution, way of life, and not go down the road of endless impeachments,” Bruce Castor, another attorney, said.

They had gathered after the Senate acquitted Trump on a charge of incitement of insurrection. Though the majority, 57, voted to convict, the vote fell short of the supermajority required for conviction.

Asked what they thought about failing to sway seven Republicans, Castor said: “A win is a win.”

“Burden of proof was on them, and they didn’t meet their burden of proof,” he said, referring to the House impeachment managers.

“Oh, these cowardly senators who couldn’t face up to what the president did,” House Speaker Nancy Pelosi (D-Calif.) told reporters in a separate briefing after the vote.

The 43 senators who voted not guilty “are basically saying no amount of facts would have made any difference to them, because they didn’t think that the president was subject to the jurisdiction of the Senate,” Rep. Jamie Raskin (D-Md.), the lead impeachment manager, added.

While some Republicans focused solely on how they believed the trial was unconstitutional in explaining their not guilty votes, others said Trump’s actions and words didn’t rise to the level of incitement.

“The House brought only one charge before the Senate: incitement,” Sen Ted Cruz (R-Texas) said in a statement. “Donald Trump used heated language, but he did not urge anyone to commit acts of violence. The legal standard for incitement is very high and it is clear by the results of this vote that the House Managers failed to present a coherent standard for incitement.”

Sen. Dan Sullivan (R-Alaska) said, “The House Managers provided the former President with no due process—and argued none was required—and side-stepped the First Amendment defense of his speech.”

Trump gave a speech on Jan. 6 as violence at the U.S. Capitol, approximately two miles away, started. Trump used the words “fight like hell” in reference to his team’s legal efforts around election integrity, while telling supporters to go to the Capitol “peacefully and patriotically.”

Democrats claimed that Trump used the words to incite his supporters to commit violence.

Trump in a statement after being acquitted thanked members of Congress “who stood proudly for the Constitution we all revere and for the sacred legal principles at the heart of our country.”

“This has been yet another phase of the greatest witch hunt in the history of our Country. No president has ever gone through anything like it, and it continues because our opponents cannot forget the almost 75 million people, the highest number ever for a sitting president, who voted for us just a few short months ago,” he said, adding that the Make America Great Again movement “has only just begun.”

Trump adviser Jason Miller read the statement from his phone to reporters before van der Veen criticized media outlets for “feeding the anger of both sides.”

“The media, the mainstream media, the right media, the left media, I don’t care what media it is. The media is feeding the division in this country. They’re bloodthirsty for ratings. When I watch the news, I watch one channel and it’s one world, and I watch another channel, and it’s a totally different world,” he said.

“And it’s time that the media went back to integrity in their reporting, unbiasness [sic] in their coverage, and work to cool the temperature in this country, instead of always trying to ratchet it up. And I think it’s their obligation to do that starting right now.”

The attorney also said the country should “unite as a people.”

“Our country needs to face the business in front of it with all seriousness and purpose, love and peace in our hearts, and move the ball forward so that this great nation can get as strong as possible in the face of this pandemic,” he said. “It’s absolutely crucial that this country move forward in unity. Put away the partisan backlash, back and forth, and do everything that we can to find justice every day in our lives.”