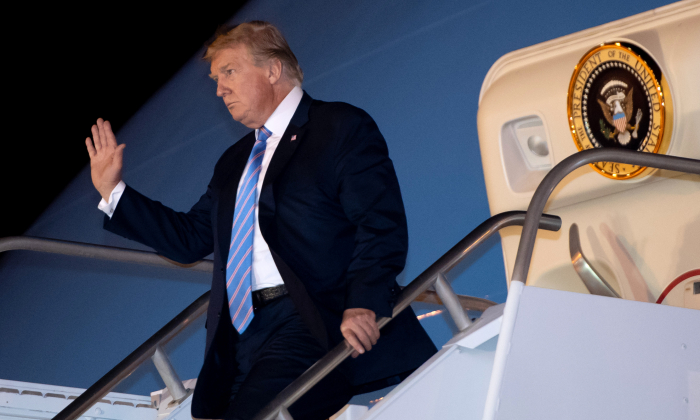 In a letter (pdf) to the legal counsel of the Treasury Department, William Consovoy, the president’s attorney, outlined the legal groundwork for why it would be a crime to comply with the request and detailed a battery of court precedents protecting Trump’s right to keep his tax returns private.

Addressing Brent McIntosh, the general counsel of the Treasury Department, Consovoy wrote that Neal’s request for the tax returns flouts “fundamental constitutional constraints,” is driven by an intent to score political points, and would set a dangerous precedent if complied with.

Trump said he believes “the law is 100 percent” on his side when asked about Neal’s request. Republicans also lambasted the request and warned about using confidential tax documents as a political weapon.

In his request to the Internal Revenue Service (IRS), Neal reasoned that his committee must have the tax returns in order to examine how the agency audits presidents. The rationale is required by law, since the committee can only request the tax returns if it has a legitimate legislative purpose.

“The answer, of course, is that Chairman Neal’s request is not about examining IRS policy. It is about scoring political points against President Trump,” Consovoy wrote.

Consovoy pointed out that the Democrats have been pushing for the release of Trump’s taxes since the 2016 election. The president’s attorney also noted that Neal filed the request days after prominent Democratic constituents publicly called on lawmakers to push for Trump’s returns.

Anticipating a protracted legal fight, Neal cautioned fellow Democrats to tamp down their rhetoric about obtaining the tax returns asking to approach the matter “gingerly and make sure the rhetoric that is used does not become a footnote to the court case.”

Consovoy suggests that Neal’s warning is evidence that he drafted “a request that concealed his party’s motive: unconstitutional retaliation against the president.”

If politics motivated the request, releasing Trump’s tax returns would violate the president’s First Amendment right to free speech since the government would be fulfilling a request motivated by a desire to punish Trump for his speech and politics, Consovoy argues.

According to Treasury Secretary Steven Mnuchin, there is no known precedent for the IRS complying with a request to release an official’s tax returns. Consovoy warns that complying with Neal’s request would set a dangerous precedent.

“It would be a gross abuse of power for the majority party to use tax returns as a weapon to attack, harass, and intimidate their political opponents,” he wrote.

The release could result in a tit-for-tat because the president has even more power to request tax returns. According to Roll Call, some 90 percent of Democrats didn’t release their tax returns when asked to in 2017, including Neal himself. If Neal’s succeeds at getting the president’s returns, doing the same to officials lower down the chain of command would be even easier, Consovoy cautioned.

“Once this Pandora’s box is opened, the ensuing tit-for-tat will do lasting damage to our nation. Can the Chairman request the returns of his primary opponents? His general-election opponents? Judges who are hearing his case? The potential abuses would not be limited to Congress, as the President has even greater authority than Congress to obtain individuals’ tax returns,” the attorney wrote.

The president’s lawyer asked the IRS to hold back on acting on the request until the Department of Justice issues a legal opinion on the matter.

Consovoy also encouraged “caution and deliberation” with the request, because the tax code includes “protections that safeguard not just the President, but all Americans.”