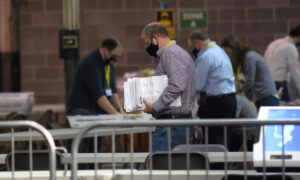 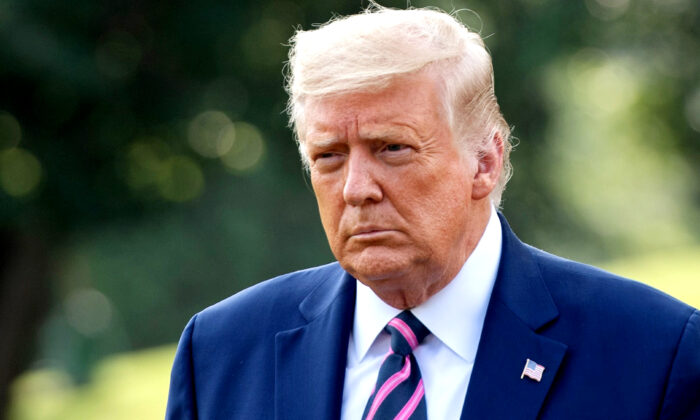 President Donald Trump speaks to the press as he departs from the South Lawn the White House on Sept. 18, 2020. (Saul Loeb/AFP via Getty Images)
Pennsylvania

Trump Campaign Lawyer Says She Was Harassed, Threatened by Attorney at Opposing Firm

A spokesman for President Donald Trump’s campaign and legal team said a lawyer working on their behalf in Pennsylvania has received threats and harassment.

According to Tim Murtagh on Nov. 16, the lawyer received “abusive emails” and calls, as well as “physical [and] economic threats.”

“One voicemail was from a lawyer at the firm representing the Commonwealth of Pennsylvania, running far afoul of standards of professional conduct,” he said. “It has been turned over to the court.”

One of our lawyers in PA has received abusive e-mails, calls & physical & economic threats.

One voicemail was from a lawyer at the firm representing the Commonwealth of Pennsylvania, running far afoul of standards of professional conduct.

It has been turned over to the court. pic.twitter.com/cwSILjbjt0

Philadelphia attorney Linda Kerns wrote on Nov. 15 in a court filing that an attorney with Kirkland & Ellis in the District of Columbia left her a one-minute-long voicemail that “falls afoul of the standards of professional conduct.”

Kirkland & Ellis didn’t immediately respond to a request by The Epoch Times for comment.

Kerns said (pdf) the harassment was because she is “representing the President of the United States’ campaign in this litigation,” adding that it’s unacceptable “for a lawyer in the Washington, D.C., office of Kirkland & Ellis, Secretary Boockvar’s outside counsel, to” engage in the alleged harassment.

Daniel Donovan, Kirkland’s lead attorney on the lawsuit, wrote on Nov. 16 that he agreed the call was “discourteous and not appropriate” but disagreed with how Kerns had described it.

“That associate was acting unilaterally, in his personal capacity, without the knowledge or authorization of undersigned counsel or the Firm,” Donovan wrote. “The associate provided a personal email and had a baby babbling in the background during the voicemail. … The Firm expects that every lawyer will conduct themselves with the highest standards of professional conduct, including being respectful of and courteous to other members of the bar.”

Donovan further claimed that the unnamed associate didn’t realize Kirkland & Ellis had a role in the Pennsylvania case.

Constitutional scholar and law professor Jonathan Turley made reference to campaigns to harass Trump’s lawyers in a Nov. 16 blog post.

“Groups like the Lincoln Project targeted law firms and launched a campaign to force lawyers to abandon Trump as a client,” he wrote. “This effort resulted in Twitter blocking the Lincoln Project for targeting individual Trump lawyers in a tweet (accompanied by a skull-and-crossbones emoji) that was deemed threatening and abusive.

“That only seemed to thrill the Lincoln Project,” he said. “It reportedly joined Democrats in targeting law firms like Porter Wright Morris & Arthur and threatening its lawyers with professional ruin. It claimed that any firm working for Trump on election litigation was part of a ‘dangerous attack on our democracy.’

“Trying to strip people of their counsel, of course, is the real attack on our democracy—and it worked: The firm buckled and withdrew, saying the pressure caused internal struggles and at least one lawyer’s resignation.”