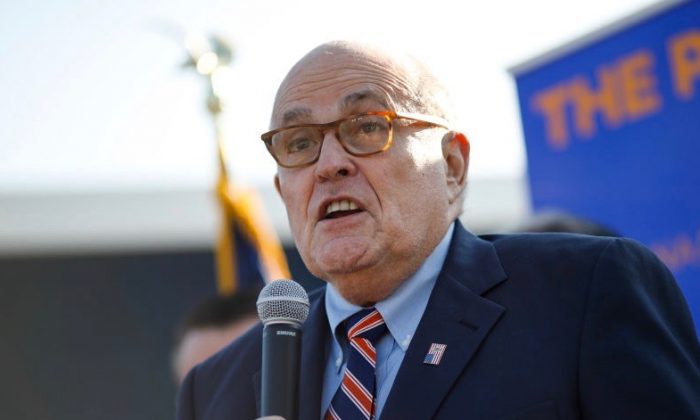 Giuliani and the rest of Trump’s legal team are focused on getting Mueller to wrap up the probe. Giuliani called Yahoo News on Dec. 12, to express his views on the situation.

“Our strategy is … to do everything we can to try to convince Mueller to wrap the [expletive] thing up, and if he’s got anything, show us,” Giuliani told Yahoo. “If he doesn’t have anything, you know, write your report, tell us what you have, and we’ll deal with it. He can’t prosecute [Trump]. All he can do is write a report about him, so write the [expletive] thing and get it over with now.”

“Cohen is a completely dishonorable person. … I’ve never heard of a lawyer that tape-recorded their client without the client’s permission, and I’ve known some pretty scummy lawyers,” Giuliani told Yahoo. “You don’t exist very long in the legal profession if you go around taping your client.”

Cohen’s sentence was reduced because of his guilty plea and agreement to cooperate with the probe.

Giuliani also told Yahoo that Mueller’s investigation shifted focus from Russian collusion to campaign finance law violations because there was nothing to uncover about collusion.

Giuliani saw questions Mueller submitted to the president on the collusion issue. He also wasn’t impressed.

“I’ve seen their questions. There’s nothing to look at. They could look at collusion for the next 30 years and, unless they get somebody to lie, they’re not going to find any evidence of it because it didn’t happen,” Giuliani told Yahoo.

Giuliani questions Mueller’s competence in handling the investigation, looking at how long it has stretched and how little it has found related to what its purpose was supposed to be.

“I think he’s desperately trying to come up with some smoke and mirrors so he can say there’s some form of collusion. I don’t think he can do it,” Giuliani told Yahoo. “I saw a prosecutor that was on a fishing expedition as opposed to somebody that has a solid piece of evidence and wants to nail you with it. It’s like something you’d do at a beginning of a case, not the end.”

I never directed Michael Cohen to break the law. He was a lawyer and he is supposed to know the law. It is called “advice of counsel,” and a lawyer has great liability if a mistake is made. That is why they get paid. Despite that many campaign finance lawyers have strongly……

President Trump made a series of tweets about Cohen on Dec. 13, explaining how he views the situation.

“I never directed Michael Cohen to break the law. He was a lawyer and he is supposed to know the law. It is called ‘advice of counsel,’ and a lawyer has great liability if a mistake is made. That is why they get paid. Despite that many campaign finance lawyers have strongly …”

“… stated that I did nothing wrong with respect to campaign finance laws, if they even apply, because this was not campaign finance. Cohen was guilty on many charges unrelated to me, but he plead to two campaign charges which were not criminal and of which he probably was not …”

“… guilty even on a civil basis. Those charges were just agreed to by him in order to embarrass the president and get a much reduced prison sentence, which he did-including the fact that his family was temporarily let off the hook. As a lawyer, Michael has great liability to me!”